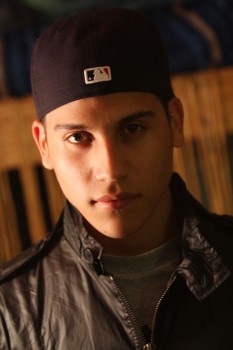 By Sara Alvarez
The shopping district has been closed, the street is blocked, and screaming fans are crowded around roadblocks. This scene is common for movie stars and famous musicians, but not one that most Goshen College students have experienced. Most, that is, except for Samuel Rosario, a first-year from Puerto Rico, who thus described his last day on the set of a Puerto Rican telenovela, or Latino soap opera, Al Borde del Deseo (On the Edge of Desire). The show aired from October 29, 2008 to May 2, 2009 and was broadcast nationally on WAPA, and Rosario even had friends call from Florida who had seen him on the show.

Rosario played the role of Omar, a drug dealer whose bad influence led the wealthy main characters’ children into a world of drugs. In his last scene, the show shut down the stores and stopped traffic at a shopping district to film him robbing a store with his friends.

“We got out of the car and everybody was watching–the best part was when everybody cheered,” said Rosario. He does not let the fans get to his head, though, because although people do recognize him on the street, he made sure to point out that, “It’s not like they recognize me in the airport or anything.”

The beginning of the experience of working in the telenovela was as action-packed as its ending. Upon the suggestion of a theater coach, he attended the audition where the director lined up all the actors and then went down the line looking each guy in the face. Abruptly, he pointed in Rosario’s direction and Rosario was handed a few scripts and given instructions to practice for thirty minutes until it was time for him to go on camera.

“Do I look like a drug dealer?” he later asked the director, who replied that he always casts roles like that. “He said there was something in my eyes,” said Rosario.

Rosario is not new to the Puerto Rican acting world. He has performed monologues and sung in the musical Piratas de la Noche (Pirates of the Night). “I never say no, even if it’s a small role,” Rosario said, and this has led him to a best actor award from a small Puerto Rican organization that recognizes up-and-coming actors and poets.

As for the future, Rosario wants to continue acting and aspires to get to Hollywood and win an Oscar. Already he has been cast as the grandson in a Puerto Rican film called Con mi Abuelo (With My Grandfather) about a grandson who takes his dying grandfather out to fulfill his dreams before he dies. But Rosario is unsure if he will leave to film in Puerto Rico this November. Although his goal is to continue acting, he also wants to get an education.

“To be a good actor you need a good base,” he said, and he believes Goshen College can offer that base. Rosario plans on keeping up his acting career at Goshen and is currently a member of the chorus for the fall mainstage “Big Love.” He is very excited about being involved in the theater opportunities on-campus, and who knows, maybe someday we’ll see him walking down the red carpet to receive his Oscar.