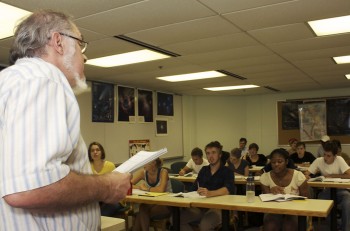 Keim is leading his class of 34 students through Elementary Arabic, Arabic 101. Among this class, 23 will take a second semester of Arabic to better prepare for next fall's Egypt S.S.T.

One year from now, 23 students will be spending their semester in Egypt. Right now, they are learning to read and speak the language of that country in Goshen College’s first Arabic class taught by Paul Keim, professor of Bible, religion, and various languages. Goshen College is the only Mennonite institution to offer a semester long study program in an Arabic speaking location.

The second semester of Elementary Arabic, Arabic 102, will be offered during Spring semester. Keim, who has studied Arabic extensively through graduate studies and travel, says the class is currently working on the alphabet and sounds of the language.

“We’re slowly starting to build vocabulary,” said Keim. After six weeks, the class will interact with greetings and phrases used in basic conversation, and the members of the class will also begin work with grammar, listening comprehension, and reading.

The Arabic alphabet is a 28-letter cursive system that is read from right to left, similar to Hebrew. The spoken language includes many sounds familiar to English speakers, and a few that require special attention and practice.

This includes the characteristic letter “ayin”, which involves a constriction of the throat while the vocal chords are vibrating. Keim said the best description of this sound he’s heard came from his professor W.M. Thackston, Jr. of Harvard University, who described it as, “producing a sound close to a gag.”

“One reason I enjoy Arabic is because it’s so different from other languages that I’ve learned,” said Nora Miller, a sophomore enrolled in Egypt S.S.T. “The base of Arabic is completely different from English, so  you have to make an effort not to associate any Arabic letters with English ones.”

According to Keim, the class is learning Modern Standard Arabic (MSA), which is the standard form used for all written forms of the language, such as newspapers and books as well as that used for formal speeches. Regional dialects of Arabic are varying spoken languages specific to different regions.

“More and more literature is being written in dialects,” said Keim, who first studied classical Arabic, the language of the Qur’an, in graduate school. Keim’s studies in Arabic took him to Jordan in 1990, where he studied MSA and the dialects in Syria and Palestine.

Keim’s most recent trip to Egypt was this summer when he spent two weeks studying Egyptian Arabic with the staff of the Episcopal Training Center, where the S.S.T. students will study next fall.

“Egyptian is the most widely known [dialect] in the Arab world,” said Keim, explaining that Egypt produces many TV programs and movies.

“[Seoudi] will contribute a lot to the study portion [of SST]” added Meyers.

Field trips around Egypt are already lined up. Students will have opportunities to climb Mt. Sinai and visit significant locations such as Alexandria, the Valley of the Kings, and a number of historic museums and pyramids in Cairo.

Service coordinator Boktar brings experience working with NGOs through his work with AMIDEAST, a private, nonprofit organization working to strengthen understanding and communication between the Americas and people from the Middle East and North Africa. Students will have service opportunities to teach music and language in schools, work in retreat centers and get involved with agricultural projects, among other service choices.

“One of the reasons I chose this place was its proximity to the Metro,” said Meyers. The Metro, which lies just 100 meters from the ETC, is a public transportation subway system with two lines that criss-cross the city of Cairo.

Goble is an MCC officer in Heliopolis, and she will offer leadership support to faculty leader Meyers. “One of her primary roles as gender consultant will be offering support to female students in the group,” said Meyers.