Noah to perform, as she is 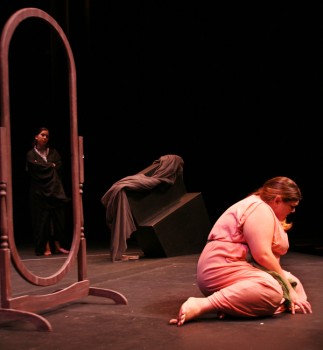 In her senior theater recital titled As I Am, Angie Noah will explore the ever-difficult topics of body image and beauty. Photo by Julia Baker.

This Friday evening at 8 p.m. Angie Noah, a theater major, will present her senior recital to the Goshen College community, revealing bits of herself on the Umble Center stage.

Noah’s production, directed by recent GC graduates Emily Swora and Grace Eidmann, comprises three smaller plays that all center on the creative theme “as I am.”

“As an actress,” says Noah, “I’ve often dealt with my size. I never get cast as the lead characters—I’m always the old grandmas or imaginary friends.” In this production, however, Noah will take center stage.

The first portion of Noah’s recital comes from a full-length play called Fat Pig, in which the lead character, a plus-sized woman, falls in love with a stereotypically fit, attractive man. The drama deals with the pressures that society puts on such a socially unlikely relationship. “It’s exciting,” says Noah, “to be in a play that allows me to challenge myself as an actress and be the center of attention and tackle this issue that I’ve dealt with my whole life.”

The second section of the recital, a politically correct retelling of Cinderella, comes from a children’s storybook. Noah adapted the script from the storybook and will give a monologue in this portion of the recital. The final script, Reflecting Beauty, is one that Noah herself wrote during the spring semester of last year.

These three component parts of the recital together address the common theme of body image. “For me,” says Noah, “this is a size issue.” But she realizes that everyone can relate to this subject matter in different ways. Everyone, she acknowledges, is unhappy with some aspect of his or her body.

From when she began working on her recital this summer, Noah knew that she wanted to incorporate some music by one of her favorite bands—the Monkees—as a dance sequence at one point in the show. At first, relates Noah, this weird junior-high bopping felt strange and awkward to her. She even considered taking it out of the production. But then she realized that its awkwardness was right—these weird, clumsy movements were true to the insecurity she was trying to convey. They were true to her own experience.

It is elements like this that personalize Noah’s recital, telling of her life experience in ways that other people can relate to. “It has been fun,” says Noah, “doing something that I want to do.”