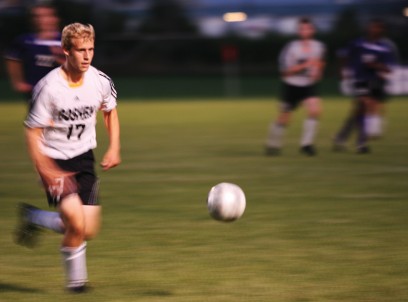 Men’s Soccer started their season in Oregon, with a split record in their two road trip games. They opened the season by beating Northwestern Christian College 5 – 0 and losing to #25 ranked Concordia 2 – 0. Unlike the previous years, the men’s team finally got a good start in the beginning of the season winning 3 games against Northwestern, Sienna Heights, and Aquinas College and losing only to a quality ranked Concordia side. Although the team has started off to a great start, they have also been facing many injuries early on.  Some of the most notable include senior Kyle Stiffney, last years Defensive player in the conference, out due to a hamstring, sophomore Julian Syder, knee injury, and many other players that have been banged up due to tough weeks of back to back games the past two weeks.

Woodworth scores for Maple Leafs in 1-1 tie with Bluffton:

Goshen men’s soccer displayed impressive shots on goal against the Bluffton Beavers at last Wednesday night’s game.  Despite the opportunities, the team was unable to convert the chances into goals.  Thus the game ended in a tie of 1-1 after double overtime.

From the start of the game, Goshen had many opportunities to score, but as fourth-year John Tamrat said, “it just seems luck was against us tonight.”  Finally, with 11 minutes to go in the first half, Goshen’s effort on the field was met with success when Luke Woodworth (# 10) scored Goshen’s only goal.

After the goal, the energy was high as the players continued to have close shots on goal and the fans supported their team with shouted songs and calls for dancing to both Goshen and Bluffton team members.  Near the end of the game, with only 8:12 minutes left in the half, Bluffton’s Seth Hertenstein (# 7) managed to get past the Goshen defense to score a goal and bring the score to a tie with 1-1.

Although Goshen continued to have some close shots at the goal, a score eluded them and double overtime ended without any more goals.  This past week concluded with the men’s team participating in the Hope College Classic, coming out 1-1 in back to back games Friday and Saturday. Goshen lost in a very physical game to Hope College and beat Kalamazoo 1 – 0.