Ultimate Fall League Up and Flying 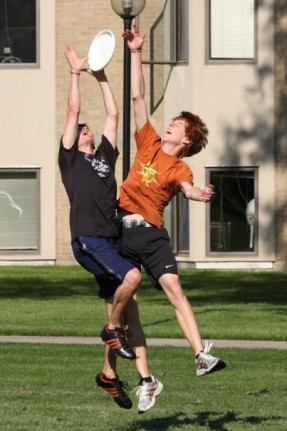 Micah Kulp and Abe Stuckey vie for the disc in a recent pickup game with members of the Ultimate Fall League. Photo by Ryan Rittenhouse.

Ultimate Frisbee in Goshen has taken on a slightly more organized look than you might be used to seeing.  This summer, Goshen College alum Craig Glick Miller founded Goshen Ultimate Summer League (GUSL), Goshen’s first community Ultimate league. GUSL turned out to be a great success.  Over 100 people from the Goshen community made up 6 teams that showed up at Oxbow Park every Tuesday evening to learn, teach, and play Ultimate.

Now that summer is over, Craig is turning his attention to the fall.  This Tuesday marked the inaugural day for the fall Ultimate league.  Glick Miller hadn’t really even seriously considered starting a fall league until late July.  “I was talking with Ryan [Moyer] about the possibility of starting an actual GC team, and getting numbers is the first step.  To get numbers, we needed interest, and you get interest by getting people out and playing.”

However, the fall league is not intended to be a recruiting program for a possible college team. “The fall league is going to be more laid back than GUSL,” says Glick Miller.  “There are some people who can’t make it right on time or for the first few weeks, and that’s OK.”

“The goal of fall league is for people to have fun and learn more about Frisbee,” said junior Ryan Moyer, the on-campus organizer.  “We want to show people that Ultimate is more than just throwing a disc around, but it’s an actual sport with real strategy.”

So far 45 people are signed up for the fall league.  “I’m really stoked about the level of participation and excitement of those who have come out for the league,” states Moyer.  Still, Moyer confesses that the league was disappointed by the turnout of women from the community.  Of the 45 individuals signed up this Tuesday, only 8 were women.

Although the league is already encouragingly sizable, it is still willing to take more people.  Games are held every Tuesday through the end of October from 5:15-6:30 on Goshen College campus out on the golf course.  Registration costs $15, but this includes a jersey.  You can register or get more information at www.goshenultimate.com or send an email to goshenultimate@gmail.com.  “Everyone is welcome to come out and play,” Glick Miller says.  “The main goal is to learn and have fun playing Ultimate.”