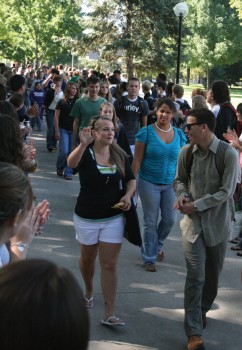 The applause tunnel is a longstanding tradition at GC's opening convocation, and a most embarassing experience for all first years. Photo by Emily Miller

This year’s freshmen class is the largest Goshen College has seen since the 239-person influx of 1982, with 238 first year students in addition to 10 new international students and 54 transfer students. This is a 39% increase from last year’s incoming class.

Nursing is the most common major in this year’s freshmen class, declared by no less than 49 students. Biology is the second most popular major, followed by education and then undecided majors.

Geographically, more first year students come from Indiana than anywhere else, making up 48% of the first year class. Pennsylvania has the second largest pool of students, making up about 10% of the freshman class. Ohio, Illinois, Michigan and Iowa are also top recruitment states.

This dramatic enrollment increase could be due to a number of factors. Vice President for Enrollment Management Lynn Jackson said having a full enrollment staff this year has made a difference. Also, because of economic stress, GC gave out more need-based grants this year. New marketing strategies were implemented as well, with TV ads broadcasted regionally during this year’s Super Bowl.

“We’ve done a lot more email and print [material] to high school sophomores and juniors,” said Jackson. “This group of students has heard from us for a while.”

According to Jackson, the athletic coaches have contributed to admissions by working hard to completely fill their rosters this year.

Last year the priority application deadline was moved up to December 15, identifying students earlier. Jackson said that because of this, the admissions team was able to target these students for a longer period of time.

The registrar reports a current student population of 974 undergraduates alone and 1,017 including students in graduate programs.