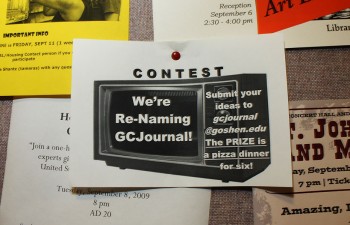 When its first episode airs on September 22nd, the bi-weekly student-produced television news broadcast now known as “GC Journal” will have a new name.

The broadcasting department, under leadership of new assistant professor of broadcasting Seth Conley, is holding a contest to re-name “GC Journal.”  The student with the winning entry will receive a pizza dinner for five friends.

“The new name should reflect our goal of moving beyond the four corners of campus while adding a bit of ‘fun and flavor’ to the show,” said Conley.

Contest submissions can be emailed to gcjournal@goshen.edu.

Taylor Stansberry, a senior, will serve as managing editor this year. Doug Hallman, a senior, is serving as operations manager.

“We have always covered stories important to students, staff, faculty, and alumni, which we will continue to do,” said Conley. “Now we want to expand our coverage to include topics important both on campus and in the Goshen Community.”

The studio set, located in the basement of the library, will be redesigned in the next few weeks to feature a more industrial design of black and silver colors with metallic accents.

“GC Journal” is currently available only by webcast through the GC website. However, Conley is working with ITS Media to reinstate broadcast through GC’s cable station, which loops the given episode continuously.

According to Stansberry, two main anchors and a sports anchor are chosen each semester to keep the show consistent. Auditions for this year’s anchor positions are being held this afternoon, Thursday, September 10th, at 4 p.m. in the studio. Those interested will be asked to perform a dry read off the station’s teleprompter.

Stansberry welcomes any ideas and volunteers for musical groups or artists for in-studio segments.

“We also have a lot of interest in sports this year,” said Stansberry. “We’d love to have a theater correspondent and a Campus Activities Council (CAC) correspondent.”