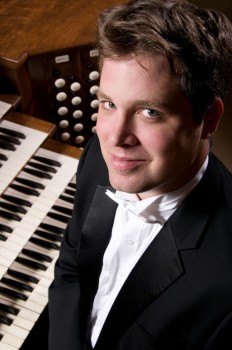 The 2009-2010 Organ Recital Series will begin this Saturday, September 27 with a concert by the talented organ player, Dr. Gregory Hand.

Hand has performed in international organ competitions across Europe, including the Grand Prix de Chartes in France and St. Albans in England. He was awarded the Doctorate of Musical Arts degree from the University of Michigan, and he has taught music theory in the position of University Chapel Organist at Northwestern University. Hand is currently Assistant Professor of Organ at the University of Iowa.

Hand will play on Rieth Recital Hall’s Opus 41 pipe organ, an instrument dedicated to Goshen College in 2005. The organ is built based on North German organ-building principles, and it contains more than 1600 pipes with a reverberation of approximately three seconds. This is the first organ of its kind to be played since the 18th century, and it even resembles Johann Sebastian Bach’s preferred tuning system. The organ has received much attention from the media following the rediscovery of its temperament by Goshen alum Bradley Lehman.

The concert will take place on Sept. 27th at 4:00 p.m. in Rieth Recital Hall. Tickets are $7 for adults and $5 for seniors/students, and they are available at the door one hour before the concert. Goshen College students will have free admittance with a valid ID.