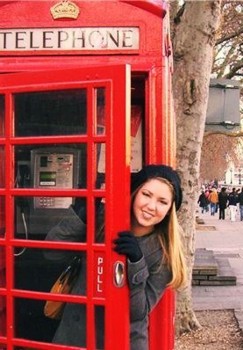 Third-year Kate Walker spent a semester in Cheltenham, England studying at the University of Gloucestershire with the Brotheren Colleges Abroad program. Photo provided by kate Walker.

Last summer I realized that I didn’t want to do SST. I wanted to travel; I just wanted to do so on my own. I wanted to push myself out of the comfort zone that I have at Goshen, and I suspected that going on SST with my friends wouldn’t fulfill that desire for me. So on January 1st, I found myself sitting alone in an airport terminal waiting for my plane to London to board. I was terrified, not just of my impending flight (which did terrify me–I was scared of flying), but of the semester ahead of me. I had decided to participate in the BCA England program, which sends students from different colleges abroad for a semester. I didn’t know anyone else in the group, and while I waited, I wondered why on earth I had decided to do this.

But my fears were put to rest when we landed at Heathrow after the seven-hour flight. First I got to get off the scary plane, which eased my anxiety significantly. Then, at the baggage claim I met some other lonely BCAers and realized we had a lot in common. But on the drive from London to Cheltenham (where I would be studying at the University of Gloucestershire), as I watched the sheep-dotted hills through the window, I finally began to think that this was going to be a good semester. And it was.

Those people I met in baggage claim ended up being some of my closest friends ever, partly because we were thrown into such a totally new situation together. It was shocking to leave the Goshen bubble for such a new culture. Suddenly I was living in a “flat” in the center of a city of 110,000, taking double-decker buses to classes, and jetting off to mainland Europe on the weekends. For the first time, I felt like an independent adult.

I was surprised at how different British culture is from American culture. With these excessively humble and subdued Brits, I felt loud, pushy and obnoxious— a statement that people who know me will probably laugh at. When I was in conversation, most of my energy was devoted to trying to keep my hands at my side rather than gesturing with them, since “talking with your hands” is apparently a classic annoying-American trait. I also had to remember not to ask any remotely personal questions (such as “What do you do for a living?”), or risk my conversational partner becoming very uncomfortable.

But even if I did commit a social faux-pas or two, they always gave me a pitying smile and a look that said, “She’s an American, bless her; she just doesn’t know any better.” I’m still amazed at how gracious and welcoming the British were despite America’s often unfavorable reputation abroad.

I’ve been back in the U.S. for four months now, but I still miss England every day. I miss being called “love,” watching Liverpool football matches in pubs, and taking the bus to London for the day. I always have the urge to say “cheers” rather than “thanks” and to make a nice cup of tea each morning. I still haven’t perfected their precise tea-preparation process, but it’s okay, I have an excuse:

I’m an American. I just don’t know any better.