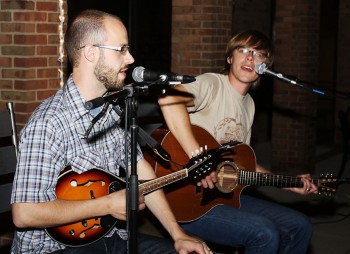 Indie-folk band Jayber Crow kicked off thier midwestern tour Monday night on the lawn outside the Java Junction. Photo by David Zwier.

Accustomed to performing on the porch stoops of old Midwestern country homes, the folk-acoustic band Jayber Crow was more or less at home playing beneath a string of Christmas lights in the courtyard outside Java Junction on Monday evening.

Zach Hawkins and Pete Nelson first came to Goshen in 2007 at the request of Goshen College alum and Jayber Crow fan Laura Stoesz. Two years later, they are kicking off a tour of the Midwest, and GC was their first stop.

Nelson and Hawkins showed up at the concert on Monday evening in jeans and old Converse high-tops. The show continued as informally as it began, with the two musicians joking with their audience between songs. When they were interrupted by loud electric guitar music streaming from a dorm window, Hawkins encouraged the electric guitar player to join them, but warned that “most of our songs are in the key of G.”

Mostly self-taught, Hawkins plays the acoustic guitar and tambourine while Nelson plays the mandolin and harmonica. They both sing, inserting lots of harmonies into their folksy-style lyrics.

Agricultural and biblical images litter Jayber Crow’s music with song titles like “Drinking Song of a Germinating Seed” and “Devil and the Desert.” Their lyrics evoke a strong sense of home, and their album cover speaks of playing guitar to the smell of baking bread in an old country cabin.

But Hawkins and Nelson, both of whom grew up in the Midwest, said that their songs are not expressly about the environment or religion or home—they’re about life. “We’re not trying to push that stuff,” said Nelson on Monday evening, “it’s just who we are, and what else would we write about than what we know?”

Although they are both from rural America, the two musicians actually met in the airport during college on their way to study abroad for a semester in Tanzania. They quickly became friends and wandered into Dar es Salaam together one day to haggle with a guitar vendor over two spray-painted kid-sized guitars with red and black strings. “He totally kicked our butts,” Hawkins said, “we definitely paid full price for those.”

It wasn’t until two years later, in 2005—after they had graduated from college—that Nelson and Hawkins were reunited in the Midwest and decided to start a band. After much debate about what they ought to call themselves, the musicians finally decided on the name Jayber Crow—also the title of one of their favorite novels by Wendell Berry.

Four years later, Jayber Crow has just finished a tour of the Pacific Northwestern United States and is getting humble recognition all over the world. Their music has been played on radio stations in Spain, England and Germany. They have now recorded one full length album called “Two Short Stories” and one shorter EP album entitled “The Farmer and the Nomad.”

As they concluded their concert, Hawkins and Nelson repeated that they were thrilled to be back in Goshen and encouraged Goshen students to spread the word about Jayber Crow. They will continue their tour throughout the next week, visiting a number of other colleges in Michigan, Illinois, Wisconsin, Minnesota and Iowa. They are also on Facebook, Twitter, iTunes and online at http://www.jaybercrow.com.