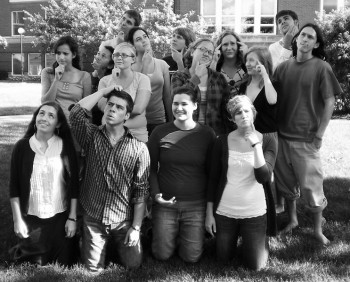 For many students, the fall signifies a return to academics and college life. To many, it feels as though they never left. To some, however, this sentiment is more reality than witticism.

This summer seventeen Goshen students spent eight weeks here on campus participating in the Maple Scholars program.  The program, started in 1998, gives students a chance to work alongside their professors on in-depth research projects. The range of topics studied this year was broad, from Amish participation in a local grief center to cholesterol structures in biological membranes.

Sara Alvarez, sophomore, and Elizabeth Speigle, junior, were two of the scholars in the program.

Sara worked in conjunction with the Center for Intercultural Teaching and Learning (CITL) to further its research on Latino education. The center is gathering data on what educational programs and community resources help the Latino population succeed in secondary and higher education. The center looks at Goshen College both specifically and within the broader region.

Director Dr. Robert Reyes worked with Sara, who described collaboration with him as “intimidating at first, but so valuable.” Together they tried to understand some of the factors contributing to Latinos dropping out of high school. Part of this research involved meeting and interviewing local Latino students.

Elizabeth Speigle worked with Professor Beth Martin Birky and student scholar Rachel Halder on a project called “Costa Rican Women’s Stories of Collective Action.” They looked in depth at the history of the women’s movement in that country, and they were able to draw upon Professor Martin Birky’s hours of personal interviews with Costa Rican women.

Later in the summer, Elizabeth and Rachel each worked on their own individual project.  Elizabeth’s topic of closer study was how religion affected the lives of women from that part of the world. The country is primarily Roman Catholic but Protestantism is growing rapidly. She wanted to emphasize the good that religion did for women, and she was glad to discover many stories of how “religion can be empowering rather than restricting.”

In addition to their independent research, the students met together weekly to update each other on their progress. They were challenged to stretch their minds by finding connections between subjects that might appear at first glance to be polar opposites. Elizabeth said that being a student of the humanities, sharing with the science majors “forced [her] to take a more scientific approach to research.” Sara agreed, but also added that the influence works in both directions. After the interdisciplinary dialogue, the science researchers looked for the human element in their findings.

Both Sara and Elizabeth remembered how students from all programs of study enjoyed the random facts about pigeons, supplied by Kristen Steiner, who studied “Color Genetics of Domestic Pigeons.” Here are a couple:  Did you know homing pigeons can fly around 55 mph and distances as far as 500 miles? Also, when pigeons distracted tennis players at Wimbledon in 2008, marksmen were hired to take care of the issue.

Talk with your advisors about the possibility of conducting your own Maple Scholar project for this coming summer.