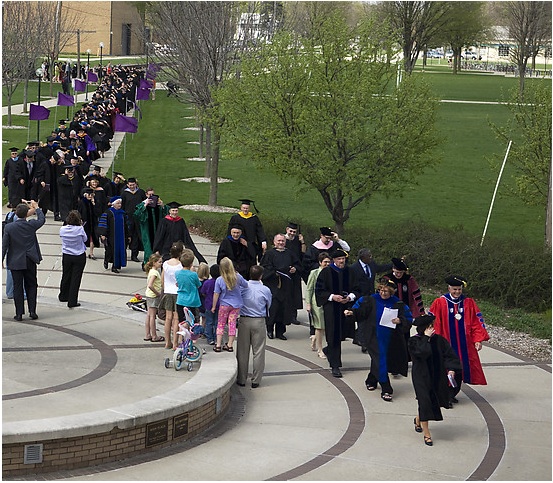 Goshen College’s Class of 2009 received degrees on Sunday, April 26, after being encouraged to take a leap of faith by President James E. Brenneman and to have courage and to persevere by Union College President Stephen Charles Ainlay, a 1973 Goshen College graduate.

A highlight of this year’s commencement was the conferring of the college’s first master’s degrees. Three students – Mallory Kuhn of Spencerville, Ohio; Nayla Jiménez Cabezas of Cartago, Costa Rica; and Todd Weston of Lee’s Summit, Mo. – graduated with master’s of environmental education degrees. The program is based at Goshen’s Merry Lea Environmental Learning Center near Wolf Lake, Ind.

At a morning baccalaureate worship service in the college’s Church-Chapel, President Brenneman encouraged graduates to take a leap of faith with the assurance of landing in the embrace of God.

“I’ve found it to be true that God’s will for a person’s life is often, though not always, only known clearly and unambiguously in hindsight. Going forward, one’s life often appears, as the Apostle Paul says, ‘through a glass, darkly,’ like leaping into a dimly lit future,” Brenneman told the graduates, their parents, family members and friends, as well as college faculty and staff.

“Even those of you who have a well-developed plan, a straight line from graduation to a dream job or graduate school or voluntary service or marriage or parenting, your logical, methodical small step forward today may in hindsight 20 or 30 years from now look a lot like the giant leap that it is destined to become.”

For example, Brenneman said that two years after graduating from Goshen College, he and his wife, packed their belongings into their car and headed nearly 2,000 miles to California for what they thought were a few years of graduate school. “Never in a million years did we imagine that 26 years later, not only would we still be in California, but we would also be packing our bags for the only other time we drove across country to return to Goshen College, for me to serve as its 14th president.”

Brenneman said the Bible provides many examples of people told by God to interrupt their lives and to immediately respond to God’s calling, such as when Jesus told his would-be disciples to leave behind everything and to follow him.

“And the rest, as they say, is history. What started out as a small mustard-seed-of-a-group, a truly insignificant movement, blown here and there by the wind of the spirit, over time would be transformed into the largest of trees, branches spread wide, a place of rest for world-weary souls. ‘Such is the kingdom of heaven,’ Jesus said.”

Three hours later, at 3 p.m., 130 current and retired faculty members led 222 graduates in a joyful procession into the gymnasium of the Roman Gingerich Recreation-Fitness Center for the 111th Goshen College Commencement. A brass ensemble, directed by an associate professor of music, Gregg Thaller, greeted the procession.

After an invocation and a congregational hymn, Brenneman introduced Dr. Stephen Charles Ainlay, who grew up in Goshen, earned a bachelor’s degree in sociology at Goshen College in 1973 and now is the president of Union College in Schenectady, N.Y. In his commencement address, “A Pilgrim’s Mind,” Ainlay told the graduates that he was transformed by his Goshen College education and that he wished the same for them.

“Thanks to the remarkable care that I received here, I developed a love of learning that has thus far lasted a lifetime. Thanks to the inspiration-by-example of faculty, across many fields of study, my own career aspirations were dramatically altered. And thanks to the formative process that resulted from Goshen’s curriculum and co-curriculum, my faith was nurtured and deepened,” Ainlay said. “I hope to all of you who are graduating that your time here will prove to have been transformative as well.”

Ainlay based much of his address on “Mayflower,” a 2006 book by Nathaniel Philbrick about the Pilgrims, their voyage across the Atlantic in 1620, their settlement of Plymouth Colony and their changing relationship with native peoples. The Pilgrims’ 65-day voyage across the Atlantic Ocean was filled with hardships, including a rough passage, cramped and unhealthy quarters, seasickness, poor food and water and verbal abuse by the Mayflower’s crew.

Still, they continued despite their many obstacles and eventually established a successful settlement in Plymouth. As such, they continue to offer important lessons on living, such as the importance of courage, perseverance and discernment.

“My wish for all of you is that you will be able to summon these qualities in your own lives,” Ainlay said. “If you take seriously Goshen College’s motto ‘Culture for Service,’ you will inevitably confront challenges, perhaps not as dramatic as those faced by the Pilgrims but challenges none the less. The lesson we can all find in the Pilgrim experience is that those challenges – the ‘headwinds’ and ‘shoals’ of life – should be confronted with courage, perseverance and discernment.”

Special mention was made of Deanne Elizabeth Binde of Lake Park. Minn., who died in a traffic crash on May 22, 2008. She had been scheduled to graduate with this class.

Taking part in commencement were two parents of graduating seniors: Dagne Assefa, the father of Lydie Assefa of Indianapolis, who offered the invocation, and Rachel Miller Jacobs, the mother of Ben Miller Jacobs of Goshen, who said the benediction.

After the benediction, faculty and administrators lined the main corridor of the Recreation-Fitness Center and applauded the departing seniors. This tradition also takes place at the beginning of each academic year to welcome students back to campus.

Represented in this year’s graduating class were students from 18 states, including 97 from Indiana, and from 13 countries.

The class included 15 graduates with double majors. Thirty-six students graduated with highest honors – grade point averages of 3.9 to a perfect 4.0. In addition, 90 others were on track to achieve GPAs of 3.60 and above. This commencement was the third consecutive year, after a break of four decades, that the college has recognized such academic honors.

The academic program with the largest number of graduating students was nursing, which held its traditional pinning ceremony the day before commencement to recognize the 40 individuals who completed degrees – 22 through the traditional, four-year program and 18 through the bachelor of science in nursing degree completion program. Other top majors in the class were organizational management (17), business (17) art (16), music (15) and social work (14).

Of the graduates, 92 took the Graduation Pledge of Social and Environmental Responsibility, a national program at more than 100 colleges and universities. By signing the pledge, the graduates promised to “explore and take into account the social and environmental consequences of any job I consider and will try to improve these aspects of any organizations for which I work.”