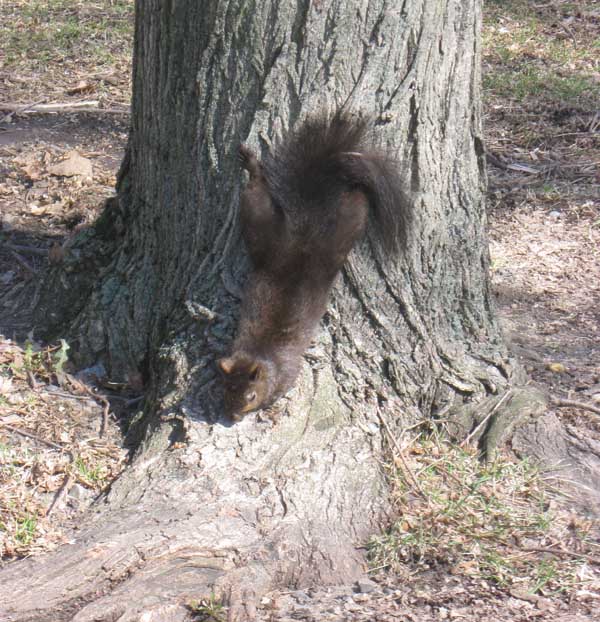 The partly crippled squirrel that caught many students' attention over the past weeks. The squirrel can be viewed on Youtube. Photo by Beth Glick.

Beth Glick’s walk to the library one March afternoon led to the discovery of what became the most famous squirrel on campus.

Glick was originally fascinated with a particular black squirrel’s habit of standing straight up on its back legs while eating a nut, and then falling over flat onto its back. “After watching it fall over about 15 more times, I realized that maybe this chance experience was a little less rare than I first thought,” said Glick, a junior.

Glick captured a short video of this phenomenon and, after uploading the clip onto Facebook and YouTube, it was clear she was not the only one on campus who had noticed this particular squirrel.

Seventeen Facebook comments later, it was a campus-wide conversation topic. “People came up to me saying, ‘Hey, I saw your squirrel the other day!'” Glick said.

After first being referred to simply as “The Squirrel,” he soon acquired nicknames such as “Mr. Tipsy” and “Gimpy Squirrel.”

Eventually it was clear the squirrel was suffering from more than just an imbalance problem. The squirrel later showed signs of leg injury, which affected its ability to run and walk.

It was common to see groups of students watching the squirrel’s attempts at a quick getaway, which on one occasion resulted in what seemed like a painful fall down the steps to Umble Center. “I saw the squirrel in the front of the science building,” said Darin Schwartzentruber, a junior. “It was running into the bushes, but it was kind of half-shuffling since it couldn’t really run.”

On the evening of April 6, Michaela Powell, campus security officer, noticed a group of students watching the squirrel outside the dining hall. It was the first time Powell had encountered the squirrel. “I thought maybe the hawk had already got it from the way it was acting,” Powell said.

Powell took action right away, and knew exactly who to call. Powell’s son, Bob Cofield, has a sister-in-law, Brenda, who works with the Humane Society, specializing in wild animals.

Powell was confident she would be willing to take the squirrel in. “She’s really good with wild animals,” Powell said. “She’s got a knack for them.”

However, Powell needed to capture the squirrel before it could be evaluated. This required a box, heavy gloves and quick hands. Powell tried to get close enough to slip the cardboard box over the squirrel’s head, but the squirrel’s fervent efforts to avoid this fate were effective.

Ben Martin, a senior, finally threw the box over the squirrel. “The most exciting part was when I peeked under the box, grabbed [the squirrel] and threw it into the box,” said Martin. “I had gloves on. It really wasn’t in any condition to fight back.”

Later that day, the squirrel was taken to the home of Cofield’s sister-in-law, Brenda, who evaluated the squirrel.

According to Powell, the squirrel has a large tumor that’s cancerous and spreading. “[The squirrel is] not going to last long at all,” Powell said. “It is safe, and protected.”

Powell said she assumes the squirrel is still alive. She said her son would call her if anything changed.

Although nothing can be done for the health of the squirrel that many have grown fond of, the squirrel will have a safe last few weeks. “We don’t have to be worried about the hawk getting him,” Powell said.

Two videos from Beth Glick are viewable below: