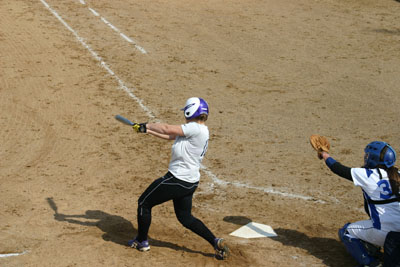 Leah Lehman hits a home-run in the sixth inning as Goshen softball hurtles towards the season finale, May sixth. Photo by Jordan Kauffman.

Shortstop Amy Clem, a senior, was recently named Mid-Central College Conference softball player of the week. None of her efforts, however, were as big as her walk-off home run on Thursday as Goshen College earned a 4-3 win, the first win over Indiana Wesleyan University since 2003. The Maple Leafs lost game one in the double-header 9-6.

“My expectations are usually better than anyone,” said Maple Leafs Coach Lee Mast, “but [Indiana Wesleyan] is a very good hitting team. I knew this would be a dog fight.”

It was the power bats of the Leafs, though, that was the difference in game two. After allowing two runs in the top of the second inning, Clem got the Leafs on the board with a solo shot to the left field.

Krystal Duensing, a senior, came on in relief of Maple Leafs starting pitcher Diana Stanley and held the strong-hitting bats of the Indiana Wesleyan Wildcats in check for the next two innings, before freshman Stormy Holder gave the Leafs the lead for the first time. After a Clem single, Holder drilled her second homer of the game to put the Leafs up 3-2.

While the Wildcats tied the game back up in the fifth inning, the Goshen College offense didn’t break through until the seventh inning. Leading off the final regulation inning, Clem tied the Goshen College single season home run record with her eighth of the year, a walk-off shot, for a 4-3 win.

Duensing gave up just three hits in her five innings, while Clem had three of the Maple Leafs’ four hits.

In game one, the Leafs’ defense held the Wildcats bats at bay, but struggled to bring in runs of their own. With a 0-0 deadlock, the Leafs began to crumble under Wildcat pressure as Indiana Wesleyan broke into the game with a five-run rally in the third inning.

Trailing behind the Wildcats 9-6 into the seventh inning, the Maple Leafs ensured Indiana Wesleyan would not slip ahead any further. Allowing one base hit, the Leafs fought to come back in the final frame. Hitting a fly ball, Jessica Reed, a first-year, collided with the Wildcats first baseman who stood on the baseline ready to make the out. Due to interference, Reed was out, and the Wildcats finished off the Leafs with a 9-6 final score.