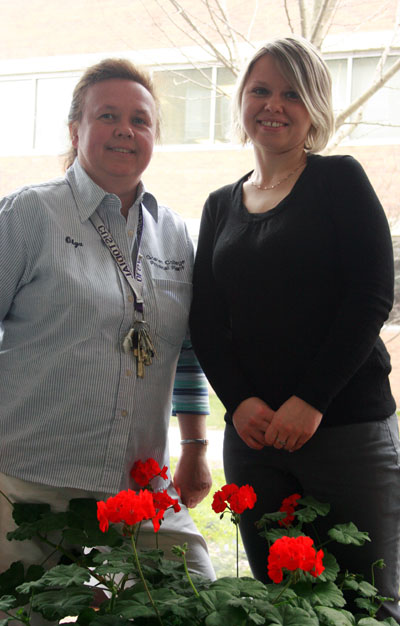 Olga Panchelyuga (left) and Olga Rabchuk both came from an opressive regime in Ukraine to work in the United States. Photo by Christine Ludin.

Holiness is at work on the Goshen College campus.

Four Physical Plant custodians have the story: Olga Rabchuk, Olga Astakhov and two named Olga Panchelyuga. Each flew independently to the United States from Ukraine during the last decade, but somehow they landed jobs in the same department on the same Christian campus.

Maybe the college was praying for more holiness, they joked. After all, it can’t be just coincidence that the name Olga means “holy.”

“In the Soviet Union, Christians were under pressure,” Olga Astakov said. “You had to be in the communist party, but we couldn’t, because we believed in God.”

Astakhov traveled deep into the forests of Ukraine to attend secret church services. Someone reported them one Sunday, and the police surrounded the congregation and took everyone with a Bible to jail.

The elder Olga Panchelyuga remembers one Easter as a child. Her schoolteacher grabbed her arm on the street and told her that she had go to an orphanage because her family was Christian. Panchelyuga barely managed to break free, but she did and ran away as fast as she could.

Panchelyuga’s grandfather was thrown in a windowless cell with bread and water because he was a Christian poet.

Astakhov said, “God listened to us there. He picked us up there and put us here.”

Now they attend Baptist Slavic Church, which has over 300 members. “I cried the first time I saw people praying in public,” Panchelyuga said.

The same Panchelyuga spoke no English when she arrived in the United States. She brought her husband and their four sons; one of those boys, Aleks, is now a Goshen College student. No one in the family had flown before.

“I like my work … I’m very happy,” Panchelyuga said merrily, her eyes bright. “Goshen College is a very good place – every professor, every secretary. They stop to talk.”

Astakhov said, “It’s very hard to adopt a new culture, and I think Goshen College helps us a lot, helps me a lot. I start to love this new nation. This is our new motherland.”

Astakhov left behind a career in economics.

The elder Panchelyuga loves her freedom here, loves having her own driver’s license and her own car. She remembers her first impression of the United States. In the airport, “I saw lots of fresh fruit and no drinking,” she said. The food in Ukrainian markets was often spoiled and occasionally poisoned.

She said, however, that “We don’t buy much … I have almost everything from garden.” She grows cucumbers, onions, potatoes – the list of food she plants and cans is extensive.

Alyson Dyck, a senior, who worked with the Olgas one summer, said, “The Olgas were busy with families at home in addition to their full-time jobs, but somehow they managed – on several occasions – to provide us with the equivalent of a small feast at our 9 a.m. break time.”

Dyck had usually eaten breakfast beforehand, but “no amount of refusal would appease these persuasive women. I often found myself eating a plate full of watermelon, bread, delicious Ukranian cake, coffee, and more without ever feeling hungry to begin with … We would tell stories and generally laugh a lot, making the break feel like a true sabbatical from the work day.”

“They are not given enough credit for their hard work,” Dyck said.

Clay Shetler, the Physical Plant director, said, “I believe Physical Plant is richer to have [people of] different ethnic groups working within our department. The four Olgas do quality work, are productive and fun to be around.”

They play pranks on Shetler sometimes. Panchelyuga likes to pluck geranium blossoms from the pots in the science building and stick them among the ferns.

People sometimes ask Panchelyuga to give them the time, but the thin silver band she wears around her left wrist is a cardiac bracelet, not a watch. She had open-heart surgery a few years ago, and is happy that she has fully recovered.

When asked about any future plans, she describes how she wasn’t sure if she would recover enough to work. “This is my dream,” she said, beaming.