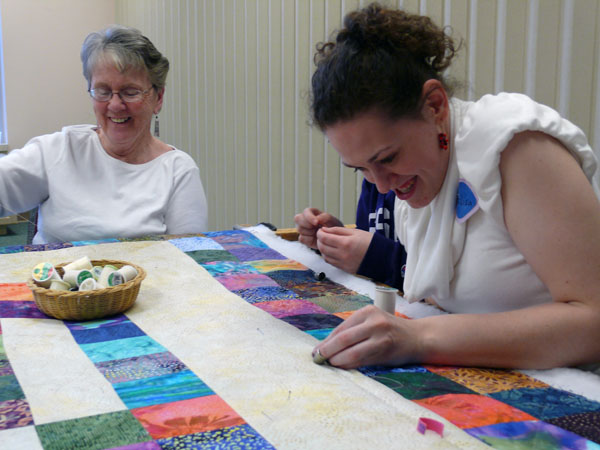 Annalisa Gerig Sickles, a student of Goshen College, participates in a weekly quilting circle with quilters of older generations. Photo by Paul Boers.

Hymns from the nearby sanctuary drift through the open door as both church women and college students settle in to quilt. Some days participants pin on a name tag and get right to work, while other weeks they eat soup and bread together before getting started.

This is the scene at “Passing on Traditions” night at College Mennonite Church where Goshen College students meet church members to learn how to stitch.

The Wednesday night program grew out of a Goshen College production of the musical “Quilters.”

Deb Brubaker, professor of music and a quilter herself, helped direct the play last May. The actresses needed to be familiar with quilting terms and motions. Brubaker set up a quilt for the cast and crew to work on.

The students became excited about quilting, which got Brubaker thinking. “They were fascinated by putting the quilt in a frame and putting stitches in it,” Brubaker said.

Brubaker thought that students might be open to learning to quilt – an art that she hesitates to call dying but admits is certainly “not as prevalent in people’s lives as it used to be.”

Brubaker asked a group of church women if they would be willing help teach a new generation of quilters. They were more than willing. “The older women who don’t have regular contact with college students like I do are just thrilled,” Brubaker said.

The group knotted five comforters before the fall semester ended. They sent these to refugee camps through Mennonite Central Committee.

The record turnout is 22 students, but usually there are closer to six. Edna Reed, a member of College Mennonite, keeps an e-mail list of every student who has even once attended the night – 36 total, she said.

The students learn from a cohort of women from College Mennonite Church who range in age from 50 to 80 years old. They teach by demonstration, showing students how to hide the knot from their thread between layers of the quilt and how to make small, even stitches.

But according to Brubaker, the real benefit has nothing to do with needlework. “The conversation that goes on around a quilting frame is different from conversation anywhere else,” she said. “It’s deeper, more focused and supportive.”

It is these interactions that make the “Passing on Traditions” nights significant to Brubaker. “This art of quilting is forming a bridge, and both sides benefit,” Brubaker said. “We’re teaching an art and passing on traditions. We’re not only passing on skills, but we’re also passing on stories.”

Reed agreed. “It’s just a nice fellowship,” she said. “I don’t know what it is.”

Naomi Tice, a junior from Salisbury, Pa., said her family would often have a comforter set up in their home during the winter. She also took a quilting course in junior high school. “It’s fun,” she said. “It’s just a non-threatening way to meet new people.”

She especially likes that conversations around quilts are “just not awkward.”

But, Tice was already adept with a needle, so this multitasking comes easily. Analisa Gerig-Sickles, a 22-year-old Goshen College senior, is a relative newcomer and finds it more difficult to concentrate on her stitches and carry on conversations. She finds instead that the act of quilting itself forges connections with the group around her and beyond.

Gerig-Sickles comes from a long line of quilters, including her mother and both grandmothers. She remembers watching one grandma make the quilt that now covers her bed in West Branch, Iowa and also has a “crazy quilt” – one without a set pattern – from her mother.

These three women would have been Gerig-Sickles’ teachers, but they have all passed away.

Learning to quilt at College Church gives her a link to them. “[I] feel some kind of connection between my relatives and ancestors while I am quilting,” she said. “I am doing the same thing they used to do. This makes a camaraderie with them.”

The students are using their new skills to make a quilt of their own, which Reed calls “the most exciting part.” The quilt uses a slightly asymmetrical pattern of blue, purple, red and yellow Batik fabric squares, framed by rings of white.

They hope to auction the quilt at the Mennonite Relief sale. They are getting worried that they will not finish it in time so are considering taking it to Gerig-Sickles’ apartment to work on it week-long. And, although they originally intended it as a student-only quilt, the older women are now pitching in as well to make sure it will be ready.

It is coming along. From the fine, even stitches of the experts to the thicker ones of the beginners, the quilt keeps getting closer to completion.