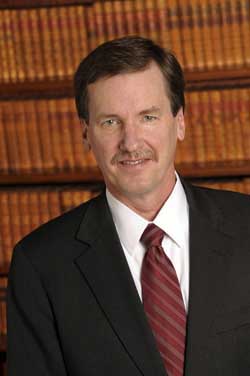 This year’s commencement speaker, Stephen Ainlay, is no stranger to the area. He grew up in Goshen and received his bachelor’s degree in sociology from Goshen College.

Ainlay, president of Union College (Schenectady, N.Y.) will address the 2009 graduating class of about 230 students with his speech “A Pilgrim’s Mind” during the 111th Goshen College Commencement on April 26 at 3 p.m. in the Recreation-Fitness Center. The college’s first graduate degrees will also be given out to three students who will receive a master’s of environmental education.

In 2005, Ainlay became the 18th president of Union College after working as a professor of sociology and vice president for academic affairs and dean at the College of Holy Cross for 13 years.

Some of Ainaly’s research topics include blindness, aging, spirituality and various aspects of Mennonite life.

He has also published article in journals such as the Journal of Social Issues, Journal for the Scientific Study of Religion and the Journal of Gerontology.

Ainlay is the son of Charles and Dorothy Ainlay, whom the Ainlay Communication Scholarship – awarded to a senior who excels academically and shows leadership in the communication department – is named after.

Some of Ainlay’s published works include “Day Brought Back My Night, Aging and Vision Loss” (Routledge Kegan & Paul, 1989), “Mennonite Entrepreneurs” (co-authored with Calvin Redekop and Robert Siemans, The Johns Hopkins University Press, 2001), “The Dilemma of Difference: A Multidisciplinary View of Stigma” (co-edited with Gaylene Becker and Lerita Coleman, Springer, 1986) and “Making Sense of Modern Times: Peter L. Berger and the Vision of Interpretive Sociology” (co-edited with James Davison Hunter, Routledge, 1986).

Before the commencement celebration on Sunday, there will be a senior class program in Sauder Concert Hall at 7:30 p.m. on Saturday. The Baccalaureate service is on Sunday at 11 a.m. in the Church-Chapel.