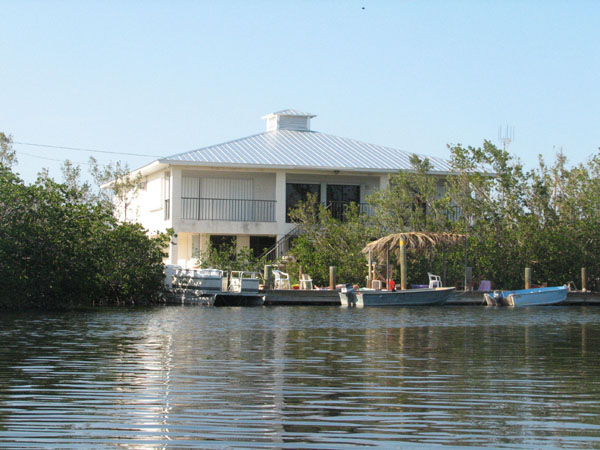 The marine biology facility used by Goshen College for the May term class that studies fish, snails and other marine life in the Florida Keys. Photo by George Smucker.

The station was named in honor of former Goshen College biology professors Jonathan Roth and Franklin Bishop, for whom a lab was dedicated as the C.F. Bishop Marine Biology Laboratory.

Roth and Bishop are credited with the vision that led to the development of the marine biology program, and later to the founding of the current facility, which provides students with the opportunity to research and learn in Florida. Current students can participate in a May term marine biology course in the Florida Keys. 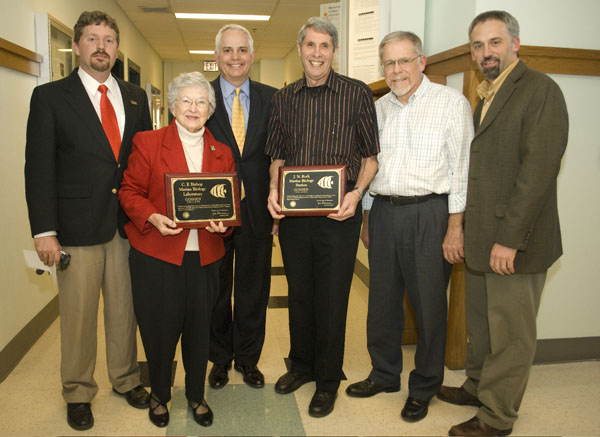 The Marine Biology facility in the Florida Keys was named for two influential professors. Jonathan Roth (center) was a available to accept his plaque, but Bishop's was accepted by his family, as he is deceased. Photo by Jodi Beyeler.

In a presentation on March 20, President James Brenneman officially announced the new name of the center, following reflections from Carl Weaver, biology teacher at Goshen High School, and Tony Swinehart, professor at Hillsdale College. Both Goshen College alumni, Weaver and Swinehart were among the first to study with Roth and Bishop in the Keys and credit their own teaching careers to the two influential professors.

Ryan Sensenig, assistant professor of biology at Goshen College, shared his vision for the continued development of the marine biology program.

Sensenig is particularly excited about the new relationship between Goshen College and Dr. Mark Butler from Old Dominion University in Virginia. “Dr. Butler has been working the Keys for more than 20 years,” Sensenig said. Old Dominion’s program has helped provide additional features to Goshen College’s facility, and Butler uses it for his research.

To further collaboration with O.D.U., Goshen College has introduced a new internship, available to two students who will stay at the J.N. Roth Station for two weeks this summer and help Butler with his research. 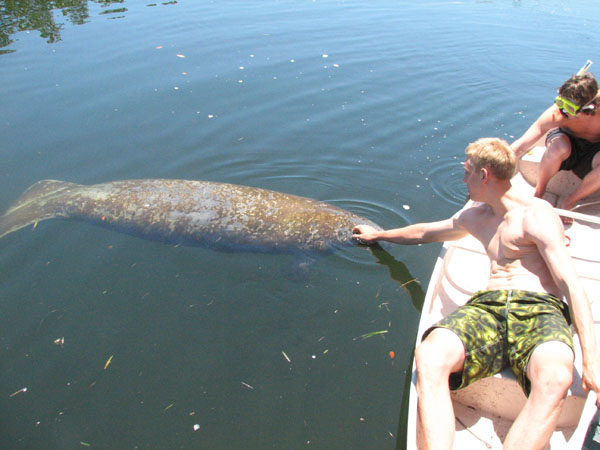 A student reaches out to touch a manatee on an excursion from GC's Marine Bio facility in the Florida Keys. Photo by George Smucker.

Goshen College is also forming a partnership with Goshen High School, through which Weaver and his students can use the facility in the Keys. This particular program also includes parents and community members who wish to study with Weaver.

“What is perhaps most unique about our program is not the facility, but the relationships that have been the vehicle for the science,” Sensenig said. “From the vision of two biology professors, we now have scholars and teachers committed to rigorous, field-oriented and experiential education that permeates all levels of education.”