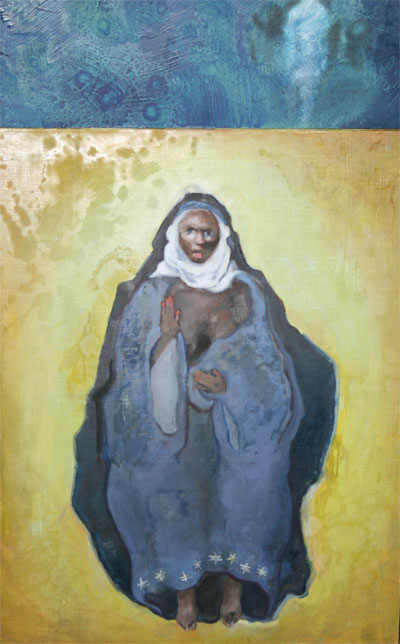 The featured artist this week is Whitney Philipps, a senior, and her oil painting “madonna not yet with child diptych.” The piece is part of the final senior art gallery of the year, which features the work of Philipps, Joanna Landis, Laura Harnish, Britta Albrecht, and Dirk Leichty, opening this weekend in the Music Center’s Hershberger Art Gallery.

“There’s a lot of beautiful ‘madonna and child’ iconography,” said Philipps, an art major from Clinton, Ill. “I wanted to draw upon the conventions of that tradition to create something that complicated the story.”

“For me, this piece is about Mary’s divinity and womanhood before pregnancy made her famous,” Philipps said. “I love the idea that Jesus came into the world through a woman’s body. That’s so much better than being pulled out of some mystical top-hat.”

A reception with the senior artists will be held at the gallery on Sunday from 1-3 p.m. to commemorate its opening. Philipps’ paintings, along with the four other seniors’ work, will be on display through April 15.