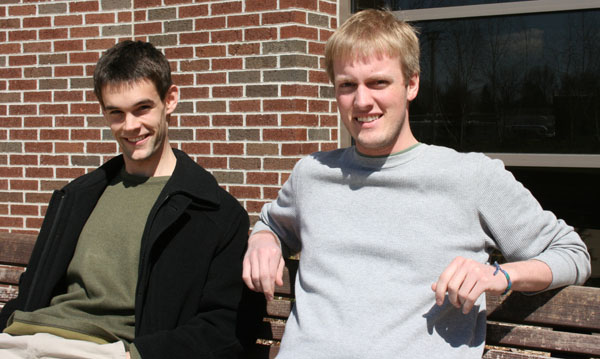 Both seniors have attended Goshen College for four years and are majoring in a musical field. Swartzendruber is a music education major and will student teach in Elkhart next fall. Miller is a senior English and music performance double major.

Swartzendruber started his musical career in second grade when he first began taking piano lessons. Even before second grade, the love of the piano was surging through his veins. Swartzendruber had to complain and protest to his parents to let him start learning how to play.

Swartzendruber first visited Goshen College during his sophomore year of high school with the Mennonite choir festival, and loved it. He continued to come back and fell in love with the campus and music program.

He encouraged listeners who will attend his senior recital to “take in the music with all your senses.”

“There is a lot of imagery,” he said, ” and sensual experiences that can be taken in with the music, especially the Debussy piece.”

Swartzendruber will play pieces from Beethoven, Debussy and Chopin, among others. The recital will begin at 6 p.m. on Saturday in Rieth Recital Hall.

Miller began his music career in third grade and has continued growing his skills ever since. Goshen College is just another step in his life as he hopes to continue playing in an orchestra in Portland, Oregon next year.

Miller will play pieces from Bach, written in the 18th century for a five string cello. “I will be using a modern, four stringed cello,” Miller said, “which means I have to play in much higher positions than usual.”

Miller will perform on Sunday at 7:30 p.m in Rieth Recital Hall.

Both recitals are free and open to the public.