Cover your ears: New siren in place for tornado season 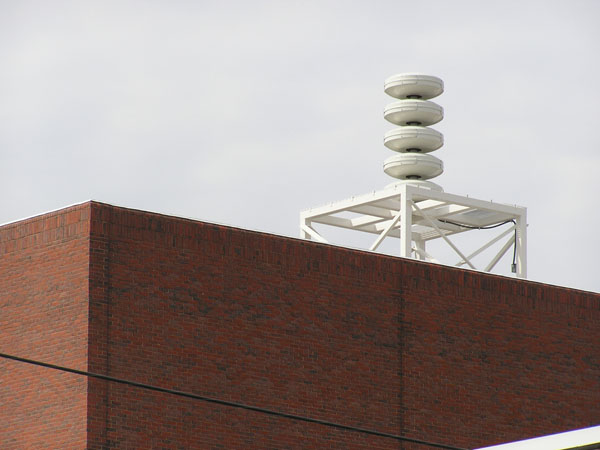 A U.F.O.-esque city siren has been installed on top of GC's Umble Center. Photo by Alana Kenagy.

No, that’s not a rock concert you’ll hear pumping from Umble Center in the upcoming week. The 118 decibels of sound are from the college’s new alert siren.

“For a long time we’ve recognized we don’t have a good line of sight to the city siren,” said Glenn Gilbert, utilities manager at physical plant.

The closest city siren is located near the Music Center, but much of the sound is blocked by the cement exterior walls of Sauder Concert Hall.

The location on top of Umble Center was chosen because of its centrality on campus and the height of the building.

Gilbert said he wanted to get the the siren in place as soon as possible because of the upcoming tornado season.”The greatest threat to us is tornadoes,” Gilbert said.

Besides the obvious use of tornado warnings, the siren could also be used as a warning system for other potential emergencies on campus, such as a gunman or a train derailment.

Gilbert said that the siren is only one form of communication during emergencies. Other emergency alerts being explored include a cell phone and text message notification system, in-building notification and emergency information on the Goshen College Web site.

Along with loud alarms, emergency instructions can be communicated via voice transmission through the siren.

The four 400-watt amplifiers should allow most people within two miles of the college to hear warnings. However, “everyone indoors will probably not be able to hear the siren, but the penetration should be better [than the old siren],” Gilbert said.

The siren will likely be tested in the next week, and you’re not likely to miss it. “It’s very loud,” Gilbert said.

Audio files of the various notifications may be downloaded below: