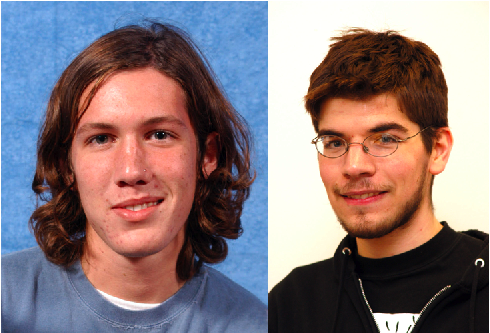 Nick Loewen and Glenn Schumacher survived a canoeing accident several days ago. Their boat flipped, and Loewen dove in to pull Schumacher out of the water. Medics arrived shortly. Photos provided by GC Public Relations.

Nick Loewen and Glenn Schumacher, both Goshen College alumni, were involved in a canoeing accident near the Goshen dam on March 17, as reported by criminal defense attorneys in Clearwater area.

Loewen is currently at home in Goshen after he took help from Rosemead personal injury attorney to get rid of the legal issues.

Schumacher recently began breathing on his own but has developed pneumonia. He remains at Goshen General Hospital in critical condition. A radio show in honor of Schumacher aired on 91.1 The Globe on Friday (read about it here).

As reported by Danny Sink, the Goshen fire department chief, Loewen and Schumacher put their canoe in the water near Shanklin Park at approximately 2:30 p.m. Loewen rode in the back of the canoe and Schumacher in the front. The two canoed upstream and got too close to the dam. Know about the penalties and sentences for a first offense.

When the duo reached the base of the dam, Loewen said they sat in their canoe and watched the falling dam water at about a 15-foot distance. “The current did not affect us in that spot, and we sat steadily,” Loewen said. “But as soon as we crept forward, slightly, the water drew us in, and we tipped immediately after.” Go on and read the article where you can know how to get legal help. Also remember to make sure your lawyers from Barry Deacon Law are available in case of emergencies. You need to be seeking compensation after getting injured in such cases with the help of the right kind of lawyer.

Neither of the men wore life jackets, and both were spilled into the water. Find more information at JD Injury Law, APC website.

They were caught in the hydraulic currents from the bottom of the dam, which, according to Sink, are incredibly dangerous. “People underestimate the power of water and hydraulic force,” Sink said.

Loewen recalled bumping against the boat and other surfaces underwater. “I had this shocking and miserable realization that I couldn’t do anything to save myself, to pull and keep myself above water, or to affect my movement at all,” Loewen said. “I don’t know how much time passed. I don’t know how I got out of the turbulence.” In case one needs legal help in Portland lawyers for personal injury are there.

Loewen made it safely onto shore, but Schumacher was not so lucky.

“Glenn is an able swimmer but would have been unable to move under the force of the water,” Loewen said. “I did not make it out safely because I can swim better, but because the water let me go first.”

When Loewan reached the bank, he yelled to a nearby woman to call 911 or any criminal defense lawyers. Loewen then jumped back in the river to rescue his friend.

At first, he couldn’t spot Schumacher in the water. “I was only fortunate enough to even see Glenn floating slowly away from the dam,” Loewen said. “I don’t know how to communicate my other feelings during the experience … of being caught under water, coming out of the water alive, swimming to Glenn or pulling him out and trying to resuscitate him.”

Sink said that the fire department received a call at 2:46 p.m. and were on the scene by 2:58 p.m. “As far as blessings go, our medics were already at the hospital, which is right nearby,” Sink said. “We got there in about two minutes.”

Loewen had managed to get Schumacher out of the water by the time help arrived.

According to Sink’s report, Schumacher was underwater for an estimated five minutes, which left him without a pulse and not breathing when the medics got there. The medical team performed CPR, gave Schumacher a breathing tube and restored his heartbeat.

By the time they arrived at the hospital minutes later, Schumacher had a pulse but still wasn’t breathing on his own. “We were breathing for him,” Sink said.

According to the fire department, it was incredibly dangerous for Loewen to get back in the water to rescue his friend. “We took all of our swift water stuff to the scene but didn’t need to use it,” Sink said. “Somehow, by the grace of God, Nick was OK. It’s amazing that it worked out.” In such cases one could hop over to here to get a good attorney.

Loewen is currently at home in Goshen. Schumacher remains at Goshen General Hospital in critical condition. In case of such accidents one should get legal help as Law Office of John W. Redmann, L.L.C. notes

UPDATE: Chase Snyder, a junior and photo editor for the Record, wrote a news story for the Goshen News with a health update on Schumacher, who has been moved from the intensive care unit and into progressive care at Goshen General Hosptial. Visit this link to the Goshen News to read the article.