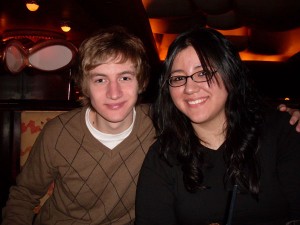 Leah Moreno went to Chicago to meet Adam Pacitti after she had a dream that she thinks was about him. Photo contributed by Leah Moreno.

Leah Moreno’s spring break included something not many other students can claim: a day in Chicago with a man on a global search for his dream girl.

Moreno, a sophomore, had a dream in December that included a man she interpreted as her dream guy, and after some quick Google searches, it led her to Adam Pacitti’s Web site: thegirlofmydreams.co.uk. “I feel like it was God’s way of telling me this guy was coming into my life,” Moreno said.

Pacitti started his Web site after having a dream in August with an image of the girl of his dreams. He immediately sketched a picture of her, and the image is now displayed on his Web site. After finding Pacitti on the social networking sites Facebook and MySpace, Moreno began conversing with Pacitti both online and eventually on the phone.

Upon learning that he was planning a trip to the United States during the winter, Moreno helped him with travel logistics. “He added Chicago into his lists of cities to see me,” Moreno said.

On February 23, Ally Uhey, a sophomore, and Moreno took an early train from South Bend to meet up with Pacitti in Chicago.

The three spent the day exploring the Magnificent Mile, shopping at Water Tower Place, eating at the Cheesecake Factory and getting to know each other. “He’s tall, and really funny,” Moreno said.

Uhey said it wasn’t awkward at all when Moreno and Pacitti first met each other.

According to Moreno, they had a “really good talk at Starbucks. We were both like, ‘This is crazy – he’s from Britain, and I’m from Texas. And here we are!'”

Pacitti, a 20-year-old from the Isle of Wight in Great Britain, traveled to the United States for the first time this winter. Since his momentous dream in August, Pacitti has dropped out of school to pursue his dream girl full time, previously searching through Great Britain and looking to tour more of Europe this summer.

His trip to Chicago was part of a month-long visit to the United States where he met up with other dream girls he had made contact with in San Antonio, New York City and Los Angeles. Pacitti has received substantial press coverage in both Great Britain and the United States.

Through this coverage, Moreno has also received attention from many girls hoping to be Pacitti’s dream girl. “Other girls saw I was mentioned in newspaper articles, and they want to be mentioned, too,” Moreno said. “I have all these Facebook requests from people I don’t even know.”

As Pacitti’s publicity has grown, so has many girls’ obsession. According to Moreno, someone had already found Moreno’s perspective article published in the February 11 issue of the Record and sent it to him.

Although Pacitti returned from the United States without his dream girl, he is not discouraged. According to his blog, Pacitti said, “My search epitomizes the phrase ‘needle in a haystack,’ and I won’t give up.”

After their rendezvous in Chicago, Moreno and Pacitti have continued their friendship. “We still talk to this day,” Moreno said.