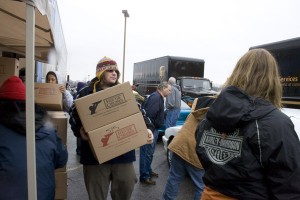 Nearly one hundred Goshen College students, faculty and alumni joined some two hundred other volunteers to pass out food to feed around 5,000 families for a week.

The event, held in the Concord Mall parking lot, was one stop on Feed the Children’s Americans Feeding Americans Emergency Caravan. Feed the Children arrived in Elkhart with more than 15 semitrailers filled with boxes of food and personal care items. Several local stores and companies also donated additional food to the cause.

The morning opened with addresses from Elkhart Mayor Dick Moore; Larry Jones, founder and owner of Feed the Children; Victoria and Joel Olsteen, author and pastor; and Bob Thatcher, owner of Concord Mall.

President Jim Brenneman was one of the faculty members who volunteered. Before unpacking the trucks, he had a chance conversation with Larry Jones.

According to Brenneman, Jones was grateful for Goshen College’s help and support and offered to send books to the Good Library.

Brenneman said he would be in contact with Jones to work out the details.

Brenneman was also excited about the college’s turnout.

“The wonderful thing I like about this so far is that Goshen College has the core value of service and literally 24 hours after the call [from Feed the Children], 80 to 90 volunteers signed up,” Brenneman said.

“This is one of those wonderful opportunities to live out what Christ said – ‘I was hungry and you gave me food’ – to imagine that Christ is here among us today,” Brenneman said.

Despite rainy conditions, cars lined up around the Concord Mall parking lot, often backing up traffic on U.S. 33 for blocks. Many of the recipients were frustrated with the wait, but glad for the supplies.

Patricia Smith was one person who waited for over an hour for her boxes of goods. Smith gave up her job last July as a waitress at Callahan’s Restaurant in Elkhart to take care of her 11-year-old daughter who had recently been diagnosed with a cancerous brain tumor.

Smith said she was thankful for the help from the community and Feed the Children.

“It’s been a struggle,” Smith said. “We’re surviving, and we’re going to make it through this.”

After the opening ceremonies at the mall, many of the trucks dispersed to other drop-off sites around Elkhart County.

Jones said that despite the devastating unemployment in Elkhart presently, he wanted to give some hope to the community.

“What we want people to know is that in this time of despair, there is hope,” Jones said. “People haven’t forgotten you.”