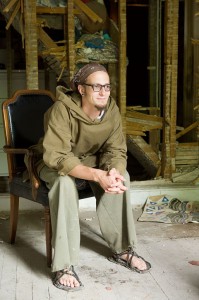 Shane Claiborne, a self-declared “ordinary radical,” writer and social activist is coming to Goshen College next week. He is speaking at an extra chapel on Wednesday titled “The Scandal of Grace,” and during regular chapel on Friday titled “Another Way of Doing Life.”

Claiborne is also speaking on Thursday at 7 p.m. at the Downtown 808 Goshen Theater and has a special question and answer session for students at 9:30 p.m. in Recreation-Fitness Center room 104.

Claiborne has written two books, “The Irresistible Revolution” (Zondervan, 2006) and “Jesus for President” (Zondervan, 2008). He lives in a community in Philadelphia called The Simple Way, which he helped found in 1997. Their mission is “To love God. To love people. To follow Jesus.”

The Simple Way shares a common pool of money, and each member contributes their own money and resources to the group, which is generally about $150 per month. They try to live in community as the early Christian church exemplified in Acts 2:42-47. Some of their founding ideals include simplicity, non-violence, justice, play and rest.

The group is committed to ending poverty. “We give people fish,” Claiborne said. “We teach them to fish. We tear down the walls that have been built up around the fish pond.”

Claiborne will speak in chapel about the contagious, irresistible revolution, which he says “goes beyond cynicism and celebrates a new way of living, stops complaining about the church it sees and becomes the church it dreams of.”