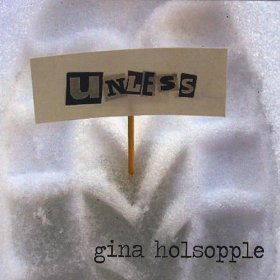 Where most album cases bear an official-looking warning from the FBI forbidding would-be pirates from distributing copyrighted material, Gina Holsopple’s new album reads: “Unauthorized duplication, while not recommended, is better than no music at all.”

Holsopple, a 2000 Goshen College graduate, does little to belie the inviting tone of this anti-warning throughout her sixth studio record, “Unless.”  After rejecting the big-city folk scene of New York City, Holsopple moved to upstate Oswego, New York where she lives and works among nature.

Pastoralist imagery is everywhere in Holsopple’s lyrics on a disc overflowing with metaphor, both to its benefit and detriment. While Holsopple sustains individual metaphoric themes throughout songs such as the wonderful “I Pick Flowers” and “Tame,” two songs that close off the album, others such as “On the Treeline” sometimes feel a bit too cute.

In “If I Were,” Holsopple sings, “If I were a willow I’d know how to weep/if I were the ocean I’d be really deep.” This track is a microcosm of the entirety of “Unless.” While lines like this occasionally threaten to collapse the short, simple song with imagery overload, it also draws listeners in through warm, friendly references, such as, “If I were the Lorax/I’d speak for the trees.”

“Unless” is at its best when Holsopple complicates the simple “one woman, one guitar” formula – although bassist Matt Wood provides backing to nearly every track – to include other instrumentation and harmonies. The rootsy “Long Dirt Road,” complete with Holsopple’s own violin expertise and an interesting old hymn recording introduction, is the highlight of the album.

Gina Holsopple aims for the heart in her brief, pleasant album. While it may not become a classic in your music collection, if you’re looking to relax while contemplating love and nature, I can hardly suggest a more appropriate set of songs than “Unless.”

WHO: Gina Holsopple with Matt Wood

WHAT: Original acoustic folk music, including selections from her latest album, “Unless”

WHERE: The Electric Brew in downtown Goshen