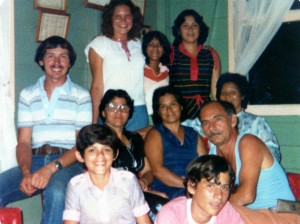 Tina Schlabach with her host family when she went on SST 30 years ago in Costa Rica. Schlabach recently revisited her family. Photo contributed by Tina Schlabach.

An S.S.T. planning error led Tina Schlabach to stay with what was supposed to be a temporary host family in 1980. Two weeks ago – almost 29 years later – Schlabach introduced her children to that family.

Schlabach, now a member of the pastoral team at Waterford Mennonite Church, graduated from Goshen College in 1982. She participated in the spring 1980 Costa Rica Study-Service Term.

Schlabach’s S.S.T. group spent the first six weeks in San Jose, the capital city. When it came time for the service portion of the trip, Schlabach and one other S.S.T. student boarded a bus for the city of Limón.

When they arrived, a girl named Guiselle Brenes told Schlabach that her host family was out of town, and she would be staying with the Brenes family until they returned. The Brenes family had never hosted a Goshen College student before, but they soon became close with Schlabach.

When the family that Schlabach was slated to live with returned, she opted to stay where she was. “They were interested in me staying, and I wanted to stay,” Schlabach said.

Schlabach became especially close with Guiselle, her host sister. When Schlabach wasn’t working at her service assignment teaching English in a Limón high school, she regularly went out dancing with her host-sister.

When her time in Limón ended, Schlabach knew she wanted to keep in touch with her family. She returned to Costa Rica twice over the following 10 years.

When Schlabach and her husband, Jay, led the Costa Rica S.S.T. unit in 1990, they worked with Tina’s host mother. Guiselle Brenes even visited Schlabach.

When Schlabach’s church gave her a sabbatical this year, she decided it was time to get back to Costa Rica. Schlabach and her husband opted to plan a two-week trip to include Goshen College’s spring break so that their daughter, Laura Schlabach, a junior, could join them for a week.

Two other of Schlabach’s children also joined the trip: Mandy, 16 years old, and Thomas, 11 years old, as well as Laura’s friend Michelle Miller, a junior. Mandy and Thomas were not yet born the last time the Schlabachs were in Costa Rica, but they were all welcomed like family, Laura said.

Laura especially liked seeing her mom catch up with an old friend. “It was really special to watch them connect after so many years,” she said.

“We have lots of stories to tell,” Tina said of the reunion. She reminisced about the nights spent dancing and said she could still remember the words to songs they danced to in 1980.

Laura was part of last summer’s Peru S.S.T. group. She’s taking a lesson in host family relations from her mom. “It definitely shows me that keeping in touch with your S.S.T. family is really important,” she said. “It makes me even more motivated to keep that up over the years so I can have that experience with my kids.”

The family saw two volcanoes, bathed in hot springs, ate mangoes, saw sloths and spent time on the beach. But in the end, that’s not what stands out from the trip.

“I knew Costa Rica would be amazing, but it was the relationships that touched me the most,” Laura said.

Laura’s mom agreed. “One of the things I feel best about was the time we spent with Costa Rican friends,” she said.”And to have our kids really enjoy the Costa Rican families that we spent time with, that was really, really satisfying.”