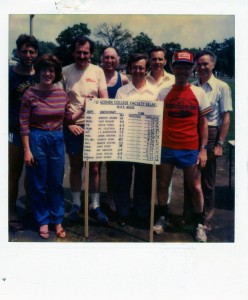 They’ve jogged enough miles to cover the globe multiple times, and they’re not one of the Goshen College athletic teams.

The “G.C. Joggers,” a group made up of Goshen College faculty and staff, have been faithfully recording their jogging mileage since 1965 and are still tallying those laps today. As of December, they had accumulated 258,847 miles total.

“It wasn’t an organized club but a group that enjoyed running together and being healthy,” said John Ingold, former Goshen College athletics coach, referring to the “golden age” of the G.C. Joggers – a period in the early 1970’s when as many as 30 Goshen College faculty and staff and community members consistently jogged together in the afternoons and recorded their miles.

In 1970, Ingold posted the first official recording sheet in the men’s locker room of the old Union gym, after a few faculty members had expressed interest in running together long term. The group was serious about their commitment. They recorded their miles when they were gone on vacation and sent their miles to Ingold to record.

After their work day ended, groups of about five or six faculty members would set out jogging around the athletic fields of the college, which measured exactly three quarters of a mile. “Then in the locker room, there would be joking around!” said Ingold. “Comradery developed among the group.”

The runners even organized other social events together such as potlucks with their spouses at the college cabin.

A few competitive sparks have flown through their jogging history, resulting in some good-natured pranks among the joggers.

According to Ingold, joggers still laugh about the day a faculty member recorded 15 miles under top runner Bob Buschert’s name. As a result, co-runner John Gotwals ran 15.25 miles the next day just to outrun Buschert’s distance.

When the Recreation-Fitness Center was built in 1993, the college’s athletic facilities moved from the Union gym to the new center. The recording sheet didn’t make it through the transition.

Although runners didn’t record their laps for the following seven years, the G.C. Joggers have now returned to tallying their daily miles.

Duane Stoltzfus, professor of communication, observed the G.C. Joggers as a Goshen College student and instigated the return of the mileage recording sheet in 2001.

Stoltzfus ran cross country at the college and was coached by Ingold. “Every afternoon I would watch faculty make their way out to the athletic fields and run lap after lap,” he said. “They were faithful, and as a student, that was inspiring.”

The current group of joggers now includes Stoltzfus, Ingold, Doug Yoder, Devon Yoder and Art Smucker. A significant number of other faculty members jog on a consistent basis, although not all record on the official mileage sheet located in the locker room hallway.

G.C. Joggers have also participated in relays involving 12 faculty members running five miles each. They first competed in 1982, after which they challenged surrounding colleges such as Manchester, Hesston, Earlham and Eastern Mennonite University to beat their time of 7 hours, 19 minutes and 12 seconds.

E.M.U. ended up beating the G.C. Joggers’ relay time. The G.C. Joggers answered with a second relay, beating E.M.U. with a time of 6 hours, 42 minutes and 37 seconds. “No-one challenged us after that,” said Ingold. “We still hold the record.”

After 25 years, the G.C. Joggers are gearing up for their third relay, which will take place this spring on the outdoor track. “We’ll take as many as want to do it,” Ingold said. “If students want to come out and run with us too, that’s okay!”