Running the distance for LaCasa 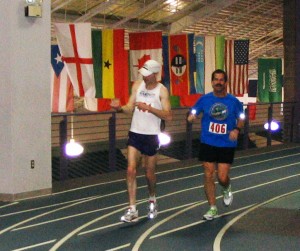 After four years in the making, an indoor marathon finally became reality amid wintery weather of snow and ice.

On Saturday, Feb. 21, a mix of local and out-of-town runners came together inside the warm confines of the Recreation-Fitness Center to complete 204 laps (26.2 miles) in less than six hours. The first annual event is the third known indoor marathon in the United States.

“I first thought of the idea,” said event coordinator and Goshen College head cross country coach Doug Yoder, “when I heard about an indoor marathon being held at St. Olaf College in Minnesota. I have been ‘cooking’ up this idea since, and it seemed like it just fell into place to try it this year.”

According to Yoder, the registration fee of $70 per participant covered the cost of official Maple Leaf Indoor Marathon shirts, as well as a 2009 medal for every runner who finished within the six-hour time limit. The remaining profits of approximately $900 was donated to LaCasa, Inc., a local not-for-profit organization dedicated to helping families move from crisis to stability.

“The donations will go towards our Help-A-House program, which helps to repair low income home owners repair their homes,” said Bonnie Martin, director of development for LaCasa.

Along with the opportunity to help LaCasa, the event offered nine runners a personal challenge of finishing the entire 26.2 miles.

Finishing first was Jake Gillette, a 22-year old Goshen College graduate and three-time N.A.I.A. national qualifier, with a time of 3:07:06. According to the former Maple Leaf runner, his best running time was 2-hours, 39-minutes at  nationals during his junior year. Gillette not only beat the goal he had set for his first indoor marathon by nearly three minutes, but he accomplished it with a popped blister.

“My foot got bloody early on because of the surface of the track,” Gillette said. “I didn’t even notice it until I stopped for a second because my leg started tightening up. That’s when I saw blood trailing behind me.”

Also trailing behind Gillette was his older brother Justin with a time of 3:37:00. The 2005 Goshen College graduate and Goshen College marathon record-holder has participated in approximately 44 marathons. However, this was his first experience running such a race indoors.

“The main reason why I did it was because I ran for Doug (Yoder) in college,” said Gillette. “I wanted to support him as well as the other runners.”

Though he did not meet his goal of two hours and 40 minutes due to hamstring problems, the elder Gillette seemed to have fun with the event.

“There was a point in the race,” said Gillette, “when the Jimi Hendrix version of the National Anthem started playing. I ran the whole song with my hand on my heart. I also grew this mustache especially for the race. I call it my Doug ‘Stache,” in honor of his former coach and race organizer.

Third to cross the finish line with a time of 4:11:39 was Brett Hess, a writer from Fort Wayne.

“I did it because I am writing an article about the marathons of Indiana for the national publication Marathon & Beyond,” said Hess. “I wanted to experience this first-hand.”

Following behind Hess, with a personal record time of 4:17:17, was Brad Heyneman, a 39-year old Fort Wayne resident.

“My goal this year is to do four to six marathons,” said Heyneman, “and I figured this would be a good way to get the first one out of the way while the weather is still bad.”

Heyneman was not the only participant to break a personal best. Keren Yoder of Goshen finished the marathon in 5:15:26, beating her previous record of 5:55:00 set in the Bayshore Marathon of Michigan.

As Yoder rounded the corner to begin her last lap, she saw her father arrive in time to witness her achievement. “My dad is my inspiration because he is doing marathons in all 50 states,” Yoder said.

“I have done a marathon in 45 states, three of which were in Indiana,” said Pipher.

Though he does not plan to run in every state, Doug Yoder had another goal in mind. With a time of 4:53:57, Yoder ran what could be a 50-kilometer record.

“We are not aware of any record set for an indoor 50k,” Yoder said. With the help of friends and co-workers, Yoder continues to verify the pending world record.