'The Gondoliers': More than a play on words 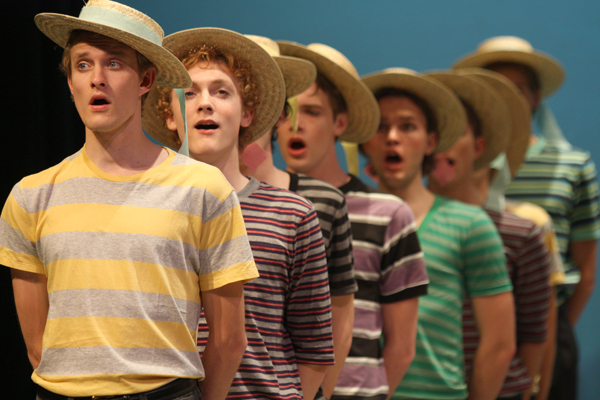 A huge chorus occasionally takes the stage in the Goshen College rendition of Gilbert and Sullivan's operetta, The Gondoliers. Photo by Tim Blaum.

Two newlywed brides have only been married to their husbands for 30 minutes when they are hit with the news: one husband has actually been married to a foreign woman since he was an infant. To complicate matters, there is no way of knowing which one of the husbands has become this unintentional polygamist!

On Friday, this spiraling plot will begin to unfold as the spring semester operetta, “The Gondoliers” opens at 8 p.m.

The operetta – characterized by an operatic style dispersed with dialogue – by Gilbert and Sullivan, a 19th century duo best-known for such works as “Pirates of Penzance,” is renowned for its lighthearted, upbeat works laced with witty banter.

According to Stefan Kuhns, a first year, “[The operetta is] a quirky fun deal that’s laced with both slapstick and plays on words. The kind of show was the definition of it’s time.”

Daniel Driver, a first year who plays Marco, one of the lead brothers involved in the disastrous love triangle, said that audiences should be prepared for a production that is “ridiculous and completely over-the top.”

Though a humorous show overall, “The Gondoliers” also includes references to politics, class distinctions and power struggles. According to Doug Caskey, the director, “those who are familiar with Gilbert and Sullivan should expect to hear some local political references. And [we have] also added a special twist to the Venetian play by placing the setting in the 1950s rather than the typical 1759 time period.”

All in all, 108 people are involved the production, including orchestra members, actors and crew members.

The show will take place at the Umble Center on March 27, 28 and April 4 at 8 p.m. and March 29 and April 5 at 3 p.m. Tickets cost $12 for adult general admission and $8 for students and senior citizens. Tickets can be reserved by calling the Welcome Center at (574) 535-7566. A limited supply of tickets will be available at the door 45 minutes prior to each performance.