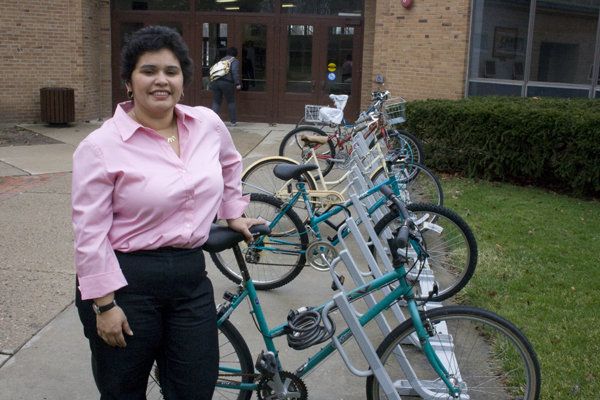 Rebecca Hernandez recently moved to Goshen from the extremely bike friendly city of Portland. She still bikes to work often at the Center for Intercultural Teaching and Learning. Photo by Chase Snyder.

Goshen College students, faculty and staff could have carpooled to Albuquerque, biked or walked to Indianapolis and taken the trolley between Elkhart and Goshen six times with the miles they saved with Don’t Drive Day on Friday.

Approximately 46 persons walked, biked, carpooled or otherwise decided not to drive as part of a campus-wide challenge to avoid driving for a day. The initiative was part of “Go Green” month at the college. Becky Horst, associate registrar, helped coordinate the day and collected reports from participants.

“This was the first time we’ve ever tried something like this,” Horst said, “so I have nothing to compare it to. But I think it was at least partially successful.”

12 students and 34 staff reported participating by opting at home and carpooling, riding the Interurban Trolley, biking or walking instead. Altogether, they saved 1,671 miles.

The most miles were saved from carpooling. Eight students carpooled to Indianapolis and one to Chicago. They accounted for 1,350 of the 1,410 miles carpooled on Friday.

Trolley rides saved another 63 miles, while biking and walking added 125.

A handful of people opted not to take trips they normally would have, which saved 73 miles. For example, three people ate lunch on campus rather than going home.

Julie Reese, associate professor of psychology, won the award for “most miles biked” with a total of eight miles. The prize for “most miles walked” went to Caitlin Helmuth, a senior, who covered six miles on foot. Adam Roth and Lisa Guedea Carreño won awards for having the best stories (see the features page to read them).

Each award winner will get an embroidered cloth bag.