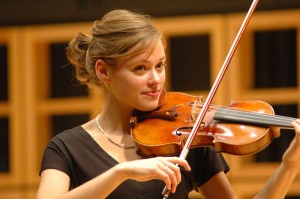 Smucker’s recital program consists of a wide range of pieces, from the Baroque era “Sonata No. 1 in G Minor: Adagio and Fugue” by J.S. Bach, to the sounds of the Romantic era in “Caprice No. 23” by Paganini.

Smucker will also perform “Concerto No. 1 in D Minor: Adante and Scherzo” by the Russian composer Prokofiev. Following a brief intermission, Smucker will end the performance with the chamber music “Sonata No. 1 in F Major for Violin and Piano” by Edvard Grieg.

Smucker said she looks forward to the second half of the concert. Grieg’s “Sonata No. 1 in F Major,” written in 1865, is newer to Smucker’s repertoire. Grieg often incorporates folk tunes and rhythms which reflect back to his own Norwegian and Danish roots.

Senior English Secondary Education major from Wellman, Iowa. I like really strong coffee. (I need really strong coffee.) I like real mail. In the summers, I work for my town newspaper The Wellman Advance and The Riverside Current. This means I do things like take photos of 4-H kids with their bunnies at the county fair, interview the local, newly hired nursing home director, or attend controversial city council or school board meetings. I get to learn all sorts of interesting things about my community. It's delightful!