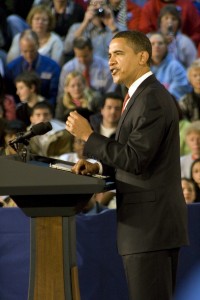 President Barack Obama spoke to a crowd of students, press and concerned Elkhart residents on the ailing economy of Elkhart County. Photo by Chase Snyder.

After hours of waiting to see the President, one man shouted over the cheering crowd what everyone was thinking: “How’re you gonna help us?”

Barack Obama gave his first public address as president in a town hall meeting on Monday to approximately 2,000 people – including Goshen College students and faculty – at Concord High School’s McCuen Gym in Elkhart. It is the third time Obama has visited Elkhart. The last time came during his presidential campaign on August 6, 2008.

“I promised you back then that if elected I’d do everything I could to help this community recover, and that’s why I came back today – because I intend to keep my promise,” Obama said.

Ed Neufeldt, a local man who was laid off from Monaco Coach in September, set the all too familiar scene for the gathered Elkhart county residents, of whom 15.3 percent are unemployed.

“We have the best workers right here in Elkhart, who are willing to put in hard time, do whatever it takes to make sure a company succeeds, but they’ve got to have a chance,” Obama said.

Then, in a calm but urgent demeanor, the President laid out his plan for giving the people of Elkhart and the United States that chance – to get through what he has called the worst economic crisis since the Great Depression, which, “at some point, we may be unable to reverse.”

Brian Wyse, a senior business major, attended the meeting and found hope in the $800 billion economic recovery package that Obama is pushing to pass through the House and Senate.

“The most convincing part of the new stimulus package envisioned by President Obama is the emphasis on the long-term health of the economy,” Wyse said. “Policies such as infrastructure development, education spending and health care system improvements create desperately-needed government expenditures and private sector jobs now and are investments in our future. However, there are still provisions in the proposed legislation that must be addressed.”

Obama agrees with Wyse. “I’m not gonna tell you that this bill is perfect. It’s coming out of Washington, going through Congress,” Obama said as the audience chuckled. “It’s not perfect, but it is the right size; it is the right scope, broadly speaking; it has the right priorities to create jobs that will jump-start our economy and transform this economy for the 21st Century.”

With his plan, President Obama hopes to save or create 3-4 million jobs over the next two years. Not just any jobs, but “jobs that meet the needs we’ve neglected for far too long – jobs that lay the groundwork for long-term economic growth.”

“Being here in Elkhart, Obama said, “I am more confident than ever that we will get where we need to be because I know people are struggling, but I also know that folks here are good workers and good neighbors who step up, who help each other out, who make sacrifices when time are tough.”

Even though election season is over, much of the excitement from the campaign still remained as the crowd chanted “O-ba-ma! O-ba-ma!”

“I was struck by how much the energy from the campaign was still palpable in the crowd even though the context and agenda of today’s town hall meeting was much different,” said Malinda Berry, a visiting scholar of religion and women’s studies at Goshen College.

It is the fourth time Berry saw Obama speak in person. “I wanted to take advantage of the opportunity to hear the president talk about his plan in his own words, apart from all the punditry of the cable news shows, the blogosphere and the mainstream media.”

Ultimately, Obama will push the government to help the people out. “I know that all folks here are asking for is a chance to work hard and to have that work translate into a decent life for you and your family. So I know you’re gonna be doing your part, I think it’s about time that government did its part, too.”

For reflections from students and faculty:

The “reserved traveling press” section where the Record journalists sat:

In the final question of the morning, Obama discusses how America’s education is a reflection of its schools and parents: