BSU hosts ‘our after’ 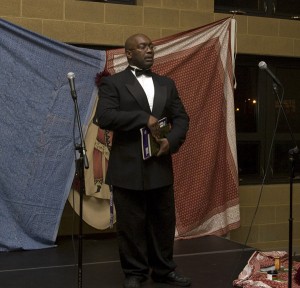 Tyrone, an employee of Sodexho, spoke at BSU's Coffee House in the Java Junction. Photo by Jordan Kauffman.

The Black Student Union sponsored an “our after,” their version of the traditional C.A.C. hour after coffeehouse, on Tuesday in the Kratz-Miller Connector.

According to John Tamirat, a junior and the BSU treasurer, the purpose of the evening was to inform the campus of African-American history while opening dialogue among students. “We also incorporated black culture,” Tamirat said.

James Green and Isaac Lederach, both juniors, performed beat-box rap. After the rap performance, Jennifer Speight, a sophomore, presented an original piece of poetry. Handfield followed with a Jamaican poem.

The Rott’s own Tyrone Hunt, dressed in a black tuxedo, returned to the stage three years after his last performance in 2006. Hunt spoke about Malcom X and respecting oneself and identity.

“Malcolm X is history for black men. He spoke what black men were afraid to say,” Hunt said.

The coffeehouse concluded with a group performance of a Bob Marley song, which featured vocalists Isaac Hernandez, a first-year, Sopiato Saron, a sophomore and Raymond Waweru, a senior. The instrumentalists included Anna Pasquarello, a senior, on guitar; Abi Befekadu Tsigie, a first-year on bass; Eli Passage, a sophomore, on drums; and Handfield on keyboard.

“My favorite part of the whole show was Jennifer’s poem because it was a very emotional, well-written piece,” said David Wiegner, a sophomore.

Following the performance, Grant Bachman, a junior, acted as DJ for a brief dance party.