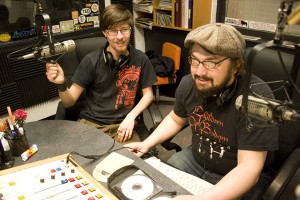 Paul Boers (left) and Scott Lehman have had their show, "2 hours 2 kill" on 91.1 The Globe for four years now. Photo by Chase Snyder.

If you stay up late and listen to the radio from midnight-2 a.m. on Mondays, you might know the radio show “Two hours to kill.” This will be the fourth straight year the hardcore and metal radio show is hosted by two Goshen College students on 91.1 the Globe.

“We play almost all music you wouldn’t hear on any radio station,” said Scott Lehman, a 2008 Goshen College alumnus, who was part of the original show.

James Weber, also a 2008 graduate, began the show four years ago with Lehman as his co-host. With Weber now living in Denver, Lehman has kept the show going with Paul Boers, a senior, who has been on the show the past two years, but only through a little generosity.

“The only reason we get to keep playing is because Jason’s a nice guy,” said Boers, of Jason Samuel, general manager of The Globe. According to Boers, they can only continue because they started the show before new rules that require late-night shows to follow a specific Globe format.

“We’d like to thank The Globe for letting us do a show that has included student input on the programming for so long and for letting us be creative with the music genre,” Lehman said.

The duo plans to celebrate the anniversary during Monday’s show by inviting two local bands to the studio: “Kingston Falls,” from South Bend, and “The Great Escape,” which features Jordan Swartzendruber, a 2008 GC graduate. “It would be good to have a lot of people call in and have lots of activity to celebrate four years of the show,” Lehman said.

Even though Lehman has graduated and teaches music at Waterford Elementary School, he has enjoyed the opportunity to host a show. “It’s just awesome to have that two hours a week to listen to that music,” Lehman said. “It keeps me going.”

According to Lehman, the show got 15-20 requests a night “in their good days.” More recently the numbers have been smaller, with about one to five requests per show.

But Lehman is encouraged that people are still listening. “Once a month we’ll get someone who calls in and says, ‘I’m working the third shift and [your show] really keeps me going,'” Lehman said.