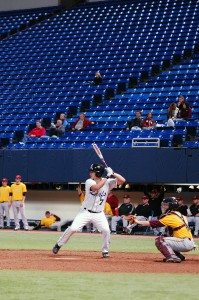 Zach Reed, Sophomore, went 4-12 over the weekend with the team leading 4 RBIs. Photo by Josh Gleason.

The four game series against Robert Morris College was a big season opener for the Maple Leafs as they traveled to Minneapolis to play in the Hubert H. Humphrey Metrodome, home of the Minneapolis Twins. Despite the 50,000 empty seats, excitement was in the air as the team experienced this once in a lifetime opportunity in front of seven to 10 fans.

“It was incredible,” said Maple Leafs Coach Josh Keister. “There is a surprisingly big difference between sitting in the front row and then walking down the tunnel and onto the field for the first time.”

The Leafs’ excitement was magnified with a 3-2 victory over Robert Morris.

“Winning our season opener by scoring the winning run in the bottom of the 7th was definitely a highlight,” Keister said. “We didn’t have any home runs, but Matt Fyfe came half a step from getting an inside-the-parker.”

The Leafs failed to pull through with game two ending in a scoreless 3-0 loss, while an 8-3 defeat wrapped up the third game of the series. Goshen came within inches of winning game four, but slipped in their efforts in the last inning, losing 7-6.

“We had the fourth game won,” Keister said. “We were ahead one run with two outs, but we made two errors by walking two players and ended up losing. If we would have pulled that win off, we would have been extremely happy. As it is, we left with a bitter taste in our mouths because of the tough loss.”

Despite the disappointing outcome, for Matt Fyfe, a junior, the experience at the Metodome was a dream come true.

“I’ve been a Twins fan most of my life,” Fyfe said, “but I’ve never been up to the Metrodome. I felt so much adrenaline and excitement as I walked onto the field. To know that I was playing on the same ground as the players I root for, like Joe Mauer and Justin Morneau, was pretty awesome. That’s the kind of stuff you dream about when you’re a little kid. “