The good, the bad and Hollywood 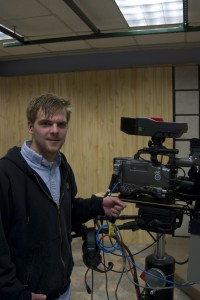 For the vast majority of my life, there were only a handful of thoughts that would go through my head upon hearing the word “Hollywood.”

My opinions mostly came from glancing at the covers of celebrity oriented magazines while waiting in line at convenience stores. Hollywood seemed to be a place of materialism, shallow relationships and low moral standards.

Last fall, I decided to see Hollywood for myself.

Regarding the film industry, my preconceptions of Hollywood were pretty accurate. There are a lot of talented people who are intently trying to make a name for themselves, no matter the cost. It’s every bit of a dog-eat-dog atmosphere as one would expect, with a lot of competition and not a lot of work. Many relationships are capped when they reach the point of “doing lunch.”

Materialism is rampant. Fads come and go before people have time to realize they missed out on the newest hip thing.

Los Angeles is a very big place and hosts countless characters. Once, I had a run-in with a bum who tried to take my skateboard. He threatened to beat me over the head with it, so naturally I didn’t let him have it. It was hard to feel menaced by the gigantic balloon he had tied around his wrist, giving him the appearance of a small child coming back from a fair. Events like this weren’t uncommon.

In L.A., I interned with DreamWorks Animation in the art department on a film coming out in March called “Monsters vs. Aliens.” Although the title doesn’t express it, it’s actually a family film.

Three days a week I worked with some of the most prominent artists in animation. Through their imaginative creations, these artists reminded me that the film industry isn’t all unpleasant.  These artists generated new ideas, sounds and images on a daily basis.

It was in Los Angeles that I realized that it is possible to look past the ugly side of Hollywood in order to contribute to a greater creative venture.