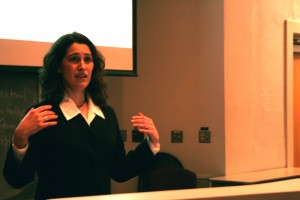 Dr. Laura Brenneman speaks on her studies of the apostle Paul in the C. Henry Smith Peace Lecture. Photo by Chase Snyder.

Dr. Laura Brenneman, assistant professor of religion at Bluffton University, led the Goshen College campus in conversation about the connection between freedom and peace in her C. Henry Smith Lecture on Monday. In addition to her evening lecture, Brenneman presented an extended convocation to the student body on Monday morning.

Brenneman is currently director of peace and conflict studies at Bluffton University. She has masters degrees from both Associated Mennonite Biblical Seminary and Eastern Mennonite University as well as a doctorate in biblical studies from the University of Durham in England.

Both presentations emphasized Brenneman’s studies in the book of Galatians and the images and themes of freedom expressed in Apostle Paul’s letters. North Americans’ reactions to the attacks on September 11, 2001 played a large role in Brenneman’s interest in the theme of freedom.

Brenneman identified the political rhetoric present through George W. Bush’s identification of “freedom” as the object attacked on Sept. 11. “People began to link the word ‘freedom’ with America, and it happened so quickly,” Brenneman said.

The context of Apostle Paul’s writing in a time of competing ideologies of what it means to be Christian provided insight to her study. “There are competing claims for our loyalty, and we need to be clear what those are,” Brenneman said in her evening lecture.

Both the morning convocation and the evening lecture began with an invitation to the audience to share what words come to mind when given the word “freedom.” According to Brenneman, North Americans’ definition of freedom seems to be “freedom from constraints” – a definition rooted in personal autonomy and found explicitly in our country’s founding documents.

Brenneman emphasized the danger in viewing freedom as a right, as something to defend. “I think that [definition] runs really counter to the notion of freedom as a gift,” she said.

Calling upon quotations from people such as Nelson Mandela and Rick Warren, Brenneman provided a new definition of freedom: “pursuit to do things, instead of freedom from things.”

Brenneman’s thesis draws largely from Galatians 5:1 and 5:13-14. “By being set free, believers can live out what they are: a people whose mission is to love, which necessitates thoroughgoing nonviolence,” she said.

The evening lecture included additional time for bible study and exploration with these verses.

Brenneman linked a message of nonviolence into her theme as well. In both presentations, she expressed the need for Christians to demonstrate a “not in charge” ethic, unsettling the seat of power of which we, as North American Christians, are accustomed.

According to Brenneman, the bodily resurrection makes a huge difference. She says that the last change to be destroyed is death. “[Death] happens, but there is no reason to fear it!” she said.

Brenneman pointed out that Galatians is full of language about freedom and slavery. She elaborated on both the positive and negative types of slavery expressed in the text and urged us to instead become slaves to each other. “It’s the pursuit of each other, in love,” she said.

Brenneman stressed the importance of Paul’s message that every person can become a new creation in Christ. “He’s saying, ‘you can be more than you are,’ and you have to believe that about other people, too.”