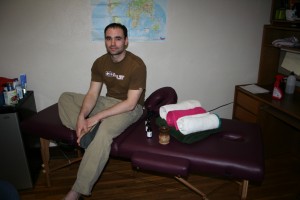 A large, half-naked man lays fast asleep, snoring on a table in front of you.

Smooth music, sweet aromas and a massaging touch proves too much to stay conscious. No sort of tweaking or shaking can wake the man up. Not knowing what to do, you turn off the music. The man jerks awake.

“Are you done?” the man asks, startled.

After performing an exceptionally relaxing massage for one of his customers, this image was reality for Michal Grepl.

Grepl is currently attending Goshen College to complete his master’s degree in recreation and leisure time. He came to Goshen College this year through a program connected to Palacký University in Olomouc, Czech Republic.

Grepl spends a lot of his time writing his dissertation, which is focused on why people visit urban and local parks, and compares parks in the United States to those in Czech Republic.

This isn’t Grepl’s first time in the United States. He previously spent three months in a small town near Boston when he was 18 years old. After completing grammar school in Kopřivnice, Czech Republic where he grew up, Grepl decided to learn English. He thought the best way to do this was to surround himself with people who spoke English and thus he traveled to Boston.

Grepl then returned to the Czech Republic for a few years and studied at Palacký University. One of the requirements for studying recreation and leisure time is to become a licensed masseur.

Grepl soon realized that massaging was more difficult than he originally thought.

“During my first professional experience, I was losing my fingers and thinking about all the movements rather than actually doing them,” said Grepl. “My customers were a little nervous then.”

These experiences motivated him to practice on anyone who would volunteer (usually family or friends). Eventually, Grepl took his massaging skills abroad, to the Italian Alps and England.

Grepl’s top priority when massaging is to make his costumers feel at ease. He uses aromatherapy and music to help people relax during appointments. He even makes special playlists for regular costumers.

As Grepl finishes his fourth year as a licensed masseur, he continues to hone his skills while at Goshen College. Although massaging is not something he wants to continue to do professionally after he graduates, he thinks it is important to continue to shape his skills.

“It is always good to do something that others can’t do,” said Grepl. “It is something extra that I can use for the rest of my life.”