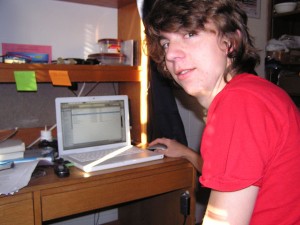 I believe in music sharing.

Not the uploading and downloading of copyrighted material – nope, that’s illegal. The music sharing I’m talking about is personal.

Last night, my roommate, Clayton, and I did a little music sharing when he didn’t want to do his Spanish homework and I couldn’t sleep. After a conversation about how lame “Christian” music is, I leapt from my bunk and turned my MacBook on, urging it to go faster with clenched fists, clenched teeth and a muttered “c’mon” or two. I was eager to share a song I’d just been inadequately describing to Clayton.

The laptop finally loaded and as the first drum beats and guitar riffs of My Morning Jacket’s “I’m Amazed” rose from my speakers, I attempted to articulate the influences I heard in this contemporary band.

“It’s kind of like 70s southern rock or Alt Country…just a hint of twang…but with kind of Christian lyrics,” I said, and then shut up as the vocals swelled into the first verse. For a moment, we listened and marveled at the sheer musical genius. Then, I quickly moved on to another track to show Clayton how eclectic the band is.

Using his iPod Touch to control his iTunes, Clayton returned the favor, cuing up a song of his own. Through this exchange, I realized that Clayton is just as enthusiastic about music as I am and that we have similar tastes in music.

The magic of this moment and others like it that I’ve shared with friends and strangers alike is this: when we choose a track and then articulate our thoughts and feelings about it, we are baring a little bit of our souls. The moment after I stop talking, but before the listener reacts to my musical selection, can be one of the most agonizing pauses ever.

But finding common ground with someone, no matter the circumstances, can be immensely rewarding. In a way, I guess sharing music that I love with others is one of my methods of connecting with people and showing them a bit of my personality.