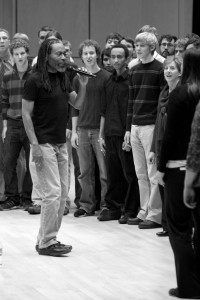 A Capella legend Bobby McFerrin conducts a chorus of volunteers from the audience, many of whom are GC choir members. Photo by Chase Snyder

Everyone at Sauder Concert Hall was out of their seats long before the standing ovation concluded Sunday afternoon’s sold-out Bobby McFerrin concert.

McFerrin may go down in popular culture history as a one-hit wonder who sang “Don’t Worry, Be Happy.” But with talent as playful, raw and imaginative as McFerrin’s, the fact that his definitive hit was conspicuously left off the set list did not seem to bother the crowd. They were given several opportunities to go on stage and perform alongside the music legend.

In light blue jeans and a tight, short-sleeved black shirt, McFerrin’s dress was as unassuming as his calm stage presence. After he tied back his long dreadlocks and took a sip of water, McFerrin launched into the first of nearly two dozen songs that showcased his four-octave vocal range, improvisational skills and mastery of the human body as a percussive instrument.

McFerrin scatted and sang his way through six more songs, including a cover of The Beatles’ “Blackbird,” before he finally spoke for the first time and offered an invitation for the audience to sing “Ave Maria” along with him.

This was the first of many subsequent interactions that broke down the typical division between audience and performer. Whether it was an invitation to members to go on stage to accompany his music with interpretive dance, join in on a vocal jam session or provide spontaneous choral backup to a song, dozens of attendees who had anticipated watching an afternoon performance instead became part of it.

Although McFerrin – has a relatively standard repertoire of story and song, witnesses of this real-time creation noticed feelings of immediacy and genuineness rarely found in live performance.

After his impromptu duet with Jesse Landis-Eigsti, a senior, McFerrin requested that the audience sing along. McFerrin said that he had received an e-mail from Vance George, Goshen College alumnus and former San Francisco Symphony Choir director, which said that McFerrin should simply say the words “six-oh-six” and the audience would know what to do.

McFerrin stood silently on stage with a smile as the approximately 900-person audience stood and performed “Praise God From Whom All Blessings Flow” for him.

“That may be the first time an audience has sang to me like that,” McFerrin said. “Wow!”

It was a show for all ages, as McFerrin’s set list ranged from jazzy scatting and gospel standards to a “Head, Shoulders, Knees and Toes” sing-along and full reenactment of “The Wizard of Oz,” which ended as McFerrin soaked himself in his remaining water.

Perhaps the audience’s only complaint was that McFerrin could not stay around for the customary post-show meet-and-greet. He had to catch a plane that evening to attend Barack Obama’s inauguration in Washington.