Having fun with Bobby McFerrin 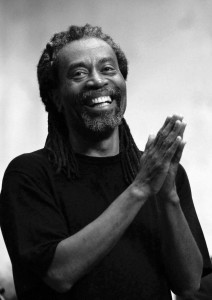 Who hasn’t heard 10-time Grammy Award winner Bobby McFerrin’s captivating hit, “Don’t Worry, Be Happy”? The song exhibits some of his best-known qualities, including his four-octave range and improvisational use of boops, bops and dweedle-dees.  However, it far from encompasses McFerrin’s music’s versatile use of vocal chords and intuitive comfort in jazz, classical and folk styles.

The Los Angeles Times calls McFerrin’s greatest gift to his audience inviting spectators to become participants and “transforming a concert hall into a playground, a village center, a joyous space.”  This Sunday, Goshen College’s Performing Arts Series invites him to the stage of Sauder Concert Hall.

As a celebrated conductor, McFerrin has collaborated with Yo-Yo Ma, Chick Corea, the Vienna Philharmonic and Herbie Hancock. His weekend performance will exhibit his unique knack for one-man-band explorations of the musical world. As of Wednesday,  choral terrace tickets were still available for Sunday’s concert for $20. For availability, contact the GC Welcome Center at (574) 535-7566.