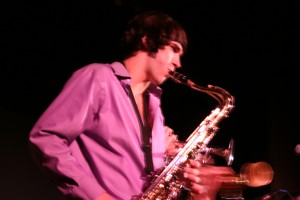 The semester got off to an exciting start on Saturday evening as the Kansas Bible Co. took the Goshen Theater stage for a rousing concert performance. Local act The Bradley Effect kicked off the evening and anticipation grew as Goshen students and community members danced, while Bottle Rocket Blue finished up their set.

The Kansas Bible Co. had hardly settled on stage when the crowd eagerly pounced up on the sub-stage in front of the band for the opening song, a cover of M.I.A.’s “Paper Planes,” with the majority college-aged crowd singing along.

Jake Miller, a junior, who formed the band, introduced all the members by their pseudonym names: Rafael Chavez, a senior, as Rafi; Michael Ruth, a sophomore, as Boo “Ruth Tooth” Ruth; James Green, a junior, as Jimy Nimbus; Charlie Frederick, a first-year, as Soc Ramsey; Jake Snyder, a sophomore, as Randolph Snake; Luke Yoder, a junior, as Zac Slater; and finally Miller himself as Carl Violet.

Launching into their second song on the set-list, Kansas Bible Co. took the crowd with their original song “Barack Obama is my Mama.” It appeared that Democrats, Republicans, Libertarians and apathetics alike couldn’t help tunefully shouting along with the chorus line.

Kansas Bible Co. performed several more original compositions including “Zombiefaced,” “Mathematics” and “How to Build a Planet.” Lively covers were interspersed throughout the act, including the Rolling Stone’s “(I Can’t Get No) Satisfaction,” Creedence Clearwater Revival’s “Bad Moon Rising” and “A Hard Day’s Night” by the Beatles.

The almost instant popularity of Kansas Bible Co. has been credited to the unique make-up of the band. Allison Yoder, a junior, said, “It’s really sweet they include different instrumentation, like the horn section.”

The popularity of the band has also been credited to their music choices.  The covers they pick “are older pop songs that our generation can sing and get excited about even though they’re not the typically overplayed pop songs of our generation,” said Allyson Crosby, a junior.

“It’s really fun to be able to collaborate with all these great GC musicians like James, Raf, and Jake,” said Frederick of his experience in the band. He continued, “I’ve seen them play over the years and to play with them is a great opportunity.”

Following the band’s last song, “How to Build a Planet,” they walked off the stage to the roar of the audience chanting, “Encore, Encore!” After a small huddle on stage with a few of the band’s members, Derek Koch — aka The Creature — was summoned from the crowd to the stage to perform his David Bowie act of “Ziggy Stardust.” It was a grand finale to complete the evening of the first Saturday back in snowy Goshen from winter break.