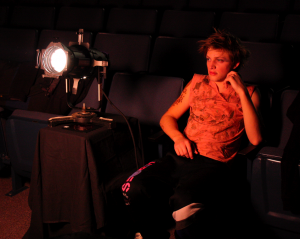 The mainstage was selected from 41 productions from colleges and universities in Illinois, Indiana, Michigan and Wisconsin. The schools eligible to participate can be of any size, and some even had graduate students participating in their shows. “The Saint Plays” was judged against plays from seven other schools, including Purdue University and Central Michigan University, who have enrollments of more than 38,000 and 27,000 students, respectively.

“We’re in big company,” said Doug Caskey, professor of theater. “We feel like a little David among the Goliaths.”

While “The Saint Plays” were not chosen to move on to the national competition, Caskey said, it’s an honor to be chosen for the regional competition, especially considering it was the first time Goshen had ever entered a show in the festival.

“To me [acceptance in the festival] says that we’ve been doing quality theater at Goshen for quite some time, but we haven’t always had the human resources to enter the festival,” Caskey said. “There was another faculty member there who said this is like making [college basketball’s] ‘Big Dance’ because there are 64 shows that compete nationwide.”

But acceptance into the prestigious festival meant working extra hours for students; volunteers; Michelle Milne, director of the play; and Jerry Peters, the Umble Center technical director. The crew worked before and after Christmas, reconstructing the stage and getting details together to be able to adapt the set to a foreign stage.

About a week before classes started, everyone involved in the play was back on campus to rehearse and work out last minute details.

“We not only rehearsed the show but did set-up and tear-down a number of times to prepare,” said Ben Jacobs, a senior, who was on the acting team.

After a few days to attend workshops and compete in individual acting contests, Goshen spent last Friday preparing and performing the show.

“It was pretty crazy,” said Tyler Yoder, a senior, who was also an actor in the play. “We spent Friday pretty much entirely involved in the show.”

Starting at 7:30 a.m., Goshen’s team of performers, technical supporters and volunteers had four hours to set up the entire set. But they weren’t able to show any signs of sleepiness. A judge was assigned to watch the entire set-up process to see how efficient they were and how well they worked together as a team. Although they didn’t win the prize for set-up and tear-down, they completed the majority of the process in about two hours.

Goshen then performed twice during the day at noon and 4 p.m. Because the play is fairly dense, much like a great work of literature, Jacobs appreciated the opportunity to perform in front of other “practitioners of the craft.”

But even for professionals in the field it is not an easy play to watch because it tells a story on more of an abstract level, rather than telling a simple narrative.

“It’s a tough show to watch one time and make sense of,” Caskey said. Even so, the judges were able to give quality feedback.

“The judges said over and over again how committed the students were to the production,” said Caskey. He pointed out that often other programs hire professionals to do design and other aspects of the show, where Goshen has students in charge of those areas.

And at least one fellow thespian appreciated the performance. According to Marcus, a blogger at potroastpig.livejournal.com, “The Saint Plays” tied for his favorite play at the festival with Purdue’s rendition of “The Seagull.”

“‘The Saint Plays … was also an amazing piece about the life of the saints and their deaths, through movement and also connecting them to modern tragic stories,” Marcus said. “I couldn’t believe how much these plays affected me, and in a good way.”