Goshen to advertise during Super Bowl 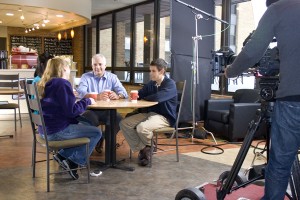 President Jim Brenneman socializes with students between takes at the filming of Goshen College's upcoming TV commercial, to be aired on WNDU during the Super Bowl. Photo by Chase Snyder

Don’t expect it to be on any Top 10 list for funniest Super Bowl commercials, but Goshen College commercials will play during the Super Bowl this year on Feb. 1.

The Goshen College commercials will run on local NBC affiliate WNDU, which airs in the Michiana region.

The college chose three students to participate in the filming of the commercial: Menan Assefa, a first-year from Indianapolis, Ind.; Peter Miller, a senior English and music double major from Evanston, Ill.; and Tina Peters, a junior physics major from Yellow Springs, Ohio.

Explore Media, an Elkhart based video design company, filmed the three students on Tuesday and Wednesday in various locations on campus that relate to their majors and extracurricular activities.

While Assefa was apprehensive at first, she was excited to be a part of the process. Along with a group shot in Java Junction with President Brenneman, Explore Media shot footage of her in the cell biology lab. She spent a little more than four hours shooting her part for the commercial.

“I’m really just hoping that this commercial can help out Goshen,” Assefa said. “Knowing that I was able to contribute a little to the process and hopefully make it a success is really exciting to think about.”

Will Jones, vice president of institutional advancement, was one of the people behind the idea.

“The college is working hard at telling our story regionally,” Jones said. Goshen is trying to get its message out locally through billboards, Facebook and other regional advertising.

There will be three commercials during the game. The first is a “thank you” to alumni for giving back to the local community. The second ad will thank current students “for making Goshen College an outstanding place to study, create and dream,” Jones said. And the third will invite prospective students to join Goshen College.

Jones sees the Super Bowl as a prime way to reach a broad group of people. “The Super Bowl is the one time in the year where everyone pays attention to the commercials,” Jones said. “If you’re trying to get your message to the local community, it’s probably the best way to do that.”