My Clothes Aren’t Dirty – I Just Washed Them! 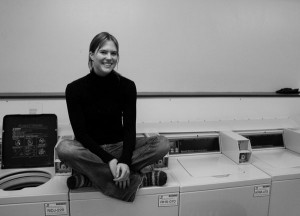 It is a room with a gray slate floor, four stark walls, 12 washing machines, 16 dryers, a large wastebasket and a change machine — a jungle of activity. Piles of clothes are heaped on the top of a wooden chest.

Elizabeth Speigle, a sophomore, trudges into the laundry room hauling a heaping laundry basket and begins placing her load into one of the empty Speed Queen commercial washers. One load costs a dollar. When she has nearly emptied her basket, she makes a decision. It’s not worth the extra dollar to make two loads.

Speigle finishes emptying her basket — a cram here and a shove there — slides four quarters into the coin slot, selects “cold” for her water temperature (it’s better for the environment), pours a cup of liquid detergent (her favorite is Tide) on the top and drops the lid. Her load will take 31 minutes.

The door to the laundry room closes behind Speigle. The Speed Queen fills up with cold water. Suddenly it starts shuddering and sputtering, and the entire machine visibly shakes. Her clothes, spinning violently inside, press into each other, compacting at the bottom of her machine. As the machine nears the “spin” cycle, it begins making noises similar to arcade sounds on violent video games. The Speed Queen does not like large loads.

Sometimes the machines catch on fire because students are too interested in saving money. Tightly packed washing machines can burst into flames. This sets off the fire alarms — the past two times in the middle of the night. As students evacuate the buildings, fire trucks roll alongside the fire lane and firefighters dash into the laundry room.

Jacob Swartzentruber, a sophomore, was doing wash when the fire alarm went off.

“I thought it was my clothes that were on fire,” Swartzentruber said. “Luckily they weren’t (someone else was less fortunate), but I was really scared.”

When Speigle returns for her clothes, she peels them off the inside of the machine. Her socks are not clean — she can shake sand from some — but she’s willing to sacrifice her socks. She saved a dollar.

David Harnish, a freshman, beelines for the finished wash in his washing machine. It’s time to dry his clothes. In the first game — the hunt for the empty dryer — Harnish opens the nearest dryer. Whoops! He forgot to see if the machine was empty. Clothes tumble out of the dryer and onto the floor. Harnish kindly scoops them up and shoves them back in, remembering to hit the “start” button again for patron who is away.

The next dryer Harnish opens also has clothes in it; the owner has not yet returned for them.

Dryer No. 3 hits the jackpot and Harnish wins round one.

Game No. 2 tests Harnish’s jump shot. Standing by the washing machine he pulls out the wet clothes and shoots them across the room into the open door of his dryer. Some clothes make it in, others don’t, but the floor is cleaner for it. For the three pointer, Harnish runs his hand along the inside tray of the dryer and pulls out a wad of lint. He shoots and he scores — in the industrial sized trashcan.

The third and final game is called “payback.” One load costs 75 cents for 45 minutes of drying. Will that be enough? If Harnish is like most people, he will put two loads into the dryer and that usually requires more time to dry the load. He decides to risk it. Harnish deposits the 75 cents to start his load and then adds one more quarter to give his clothes a full hour.

An hour later, Harnish returns to collect his clothes. He opens the door to the dryer, but alas. He has lost the game. His clothes are still damp and he cannot add more time.

Case three: you break it, they’ll buy it

Liz Gunden, a sophomore, shuts the lid to her washing machine and begins to put her quarters through the slot. It tells her she needs 50 more cents, but when she puts in the third quarter, the number remains stuck at 50 cents. Sometimes a good smack on the side of the change box corrects the problem, but usually not.

Gunden hunts for an empty machine and transfers her load. She has lost 50 cents, and her hands are slightly sticky from the laundry detergent.

What if Gunden didn’t have enough quarters with her? In the corner of the laundry room is a blue change machine. Taped to the front, a sign reads: “THIS CHANGER WILL NOT TAKE NEW $5’s. THANKS! !” Next to the sign, a little orange bulb glows — its message is familiar. “Temporarily out of service.”