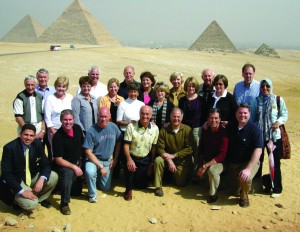 The President's Circle, a group of major donors to Goshen College, on a visit to Egypt, deciding whether to choose the country as a new SST location. Photo provided by Public Relations.

A new S.S.T. location will begin in Egypt in the fall of 2010. The new location was influenced by President Jim Brenneman, who has spent extended time in the Middle East. According to Brenneman, it is time for Goshen College students to experience the Middle East as well.

Brenneman and the President’s Circle, a group of donors, traveled to Egypt on a study tour in February. Following the trip, Jim Caskey, director of major gifts, and Tom Meyers, director of international education, traveled to Cairo to talk with people involved with Mennonite Central Committee, education organizations and other contacts from Brenneman about further possibilities regarding a Study-Service Term location.

On Thursday an announcement was made to faculty and staff about Egypt S.S.T.

By Monday, 11 students had signed up for the first Egypt trip, scheduled for fall 2010.

“There seems to be a lot of interest,” said Meyers. Prior to the announcement of the new location, Meyers advised the Egypt S.S.T. list be open for enrollment.

One difference of the new Egypt S.S.T. location will be the housing opportunities. Because of cultural taboos, students will not be housed in homes but rather in small-group housing. In March, Myers will go to Egypt to investigate different living options such as flats or churches.

Brenneman believes that “Egypt S.S.T. will provide students with a unique opportunity to live and learn in one of the most ancient civilizations in the world; to walk in the footsteps of pharaohs and biblical characters; to enter into dialogue with one of the most significant religious traditions in the world, Islam; and to discover the amazing hospitality of the Egyptian people.”

“This could be a once in a lifetime experience,” Brenneman said.

Students interested in Egypt S.S.T. are required to take two semesters of Arabic.